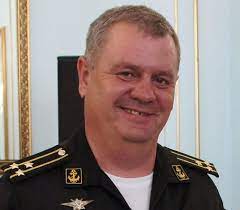 Ukraine claimed today that its forces had shot dead the deputy commander of Russia’s Black Sea Fleet in another significant blow to Vladimir Putin’s forces.

Captain First Rank Andrey Paliy, 51, is the only high-ranking naval officer allegedly killed in the war in Ukraine, although kyiv claims to have killed five army generals.

Colonel Sergei Sukharev of the Kostroma Guards 331st Parachute Assault Regiment was killed on March 18 and Andrei Sukhovetsky, 47, was killed during a special operation by a sniper on March 3.

It came as Russia claimed to have attacked a training facility for foreign fighters killing more than 100 non-Ukrainian special forces and mercenaries.

Paliy’s death appeared to be confirmed by a Russian friend, Konstantin Tsarenko, secretary of the public council of the Sevastopol Nakhimov Naval School, although Moscow has not officially acknowledged this.

One account said that he had been involved in attacks by Russian marines near Mariupol.

However, the exact circumstances of his death are unknown.

Paliy was born in kyiv and in 1993 refused to take the Ukrainian military oath and instead served in the Russian Northern Fleet.

He had previously served on the Russian nuclear missile cruiser ‘Peter the Great’.

He also served as deputy director of the Russian naval academy in Sevastopol, in annexed Crimea.

Russia today again used Kinzhal hypersonic missiles against “military targets” in Ukraine, according to the Defense Ministry in Moscow.

“A Kinzhal attack was launched from the airspace over Crimea on a fuel and lubricants base from which fuel was supplied for Ukrainian armored vehicles,” a statement said.

High-precision airborne missiles also hit a training center for “foreign mercenaries” near the town of Ovruch in the Zhytomyr region, the Russians said at the time.

The type of missile attack was not specified.