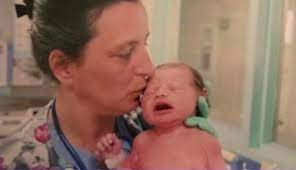 They died trying to help one of their patients, a new mother who turned out to be the girlfriend of the man accused of killing them, Nestor Hernandez.

Investigators said the parolee was given permission to visit his girlfriend on Oct. 22 after she gave birth to her child. Hernandez, 30, entered the labor unit armed with a gun around 11 a.m., according to investigators.

While visiting his girlfriend, and with her newborn in the room, Hernandez accused the woman of infidelity. According to an arrest warrant, he then began searching the closet and bathroom for anyone else in the room. He also hit her son’s mother multiple times in the head with her gun, according to the court order. After making several “sinister phone calls and text messages to his family,” Hernandez allegedly continued his “strange behavior.”

“We are both going to die today,” he allegedly told his girlfriend, followed by: “Whoever enters this room will die with us.”

Moments later, Pokuaa entered the room to care for Hernandez’s girlfriend and her baby. That’s when he opened fire, hitting Pokuaa and killing her.

Flowers investigated the room, seeing Pokuaa on the floor and also fatally shot.

After a brief confrontation, a hospital police officer shot Hernandez in the leg. He survived and was transported for treatment to another hospital.

The hospital alerted workers when it was closed during the shooting.

In a statement, a spokesperson for the Methodist Health System said:

“The Methodist Health System family is heartbroken by the loss of two of our beloved team members. Our entire organization mourns this unimaginable tragedy. During this devastating time, we want to assure our patients and employees that Methodist Medical Center Dallas is safe, and there is no ongoing threat. Our prayers are with our lost co-workers and their families, as well as our entire Methodist family. We appreciate the community’s support during this difficult time.”

Cooke Children’s also shared their support after the shooting: ”

“Our hearts are broken,” said Dr. Serena Bumpus, RN, executive director of the Texas Nurses Association. “These are our colleagues and friends. The entire TNA family mourns this loss and we extend our condolences to the families and co-workers of the victims.”

Dr. Bumpus also brought up the issue of health care worker and public safety, stating, “This is unacceptable,” Bumpus said. “No person should fear for their life simply by going to work, especially a nurse or healthcare worker whose passion is helping others heal. We hope our legislators understand that we must protect our healthcare workers.”

Incidents of workplace violence have been steadily increasing since before the pandemic, and the rate of 12.7 violent events per 10,000 full-time workers is about three times greater for RNs than all other professions, according to the U.S. Bureau of Labor Statistics.

A recent Press Ganey report showed that, on average, two nurses were assaulted every hour in the second quarter of 2022. That translates to about 57 assaults per day across the U.S.

“As the Dallas Police Department and Methodist Hospital investigate this incident we stand in unity with the victims and all those affected by this tragedy and ask that the community come together in support of our nurses at this time,” said Bumpus.