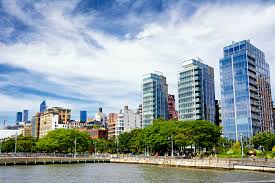 Argenis Rivera, 33, who has a dozen previous busts, was arrested at a Manhattan bus stop Monday, shortly after he randomly attacked the 43-year-old stroller victim and another woman around 1 p.m. in Hudson River Park in Manhattan, police said.

Rivera allegedly punched the first woman in her face as she was pushing a baby in a stroller and began choking her as she yelled, “I won’t let her go until the police come! “I want to die for the police.”

The baby was not harmed, sources said.

He then turned to a 37-year-old woman sitting on a bench and put a metal object to her throat before pushing her away as she repeated the bizarre tirade, police sources said.

Rivera fled the scene but was picked up near the bus stop.

This view from Hudson River Park in Manhattan looks south toward Lower Manhattan, including One World Trade Center.

A crazed career criminal who allegedly punched and strangled a woman pushing a baby stroller in a Chelsea park and then pushed another woman was charged with assault, strangulation and weapons possession on Tuesday, police said.

He was charged with assault, strangulation, criminal obstruction of breathing, menacing, and criminal possession of a weapon.

He was awaiting arraignment in Manhattan Criminal Court on Tuesday afternoon.

Law enforcement sources said River has a history of psychiatric problems and was charged in August with punching a doorman in a Midtown building, but was released because the assault charge is not eligible for bail under the state’s lenient criminal justice reforms. .