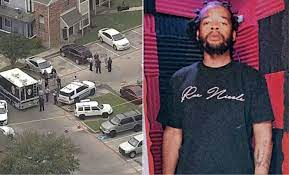 Who was Ashton Pinke?

Black man shot to death by two Texas police officers after being charged with a “knife and a club” despite his family and witnesses insisting that he only carried a cane.
Ashton Pinke, 27, of Dallas, was shot and killed by police in a Mesquite suburb Tuesday after the Mesquite Police Department received a call to hang up 911 that he heard a woman screaming and crying, he said. he.

Family members who spoke to the WFAA at the scene said the police knew Pinke because of his mental health, but said they were “stunned” by the shooting.

Police officers said in the statement that he had a knife and a club in his hand, but witnesses and members of his family insisted that he be shot with a baton, which he uses daily when he is killed.

Pink Uncle, whose name was not given, told the WFAA that “these are not strong points.”

“A stick, it has to run to you. Fight with bullets. It is the distance. Won. You can’t, you can’t win against a gun, said the uncle.

Officers were dispatched to Audubon Park Apartments in the 5800 block of Northwest Drive in Mesquite after calling the address of the phone to hang up during the call, police said in the news release.

Officers then provided Pinke with first aid until he was taken by ambulance to a local hospital, where he was pronounced dead. Police said another ambulance had also been requested for an “attack victim”.

Authorities said the two officers were placed on paid administrative leave as part of department policy, and investigators with the Dallas District Attorney’s Office witnessed the scene.

Pinke’s family hired civil rights attorney Justin Moore to represent them, according to the WFAA.

“Unfortunately, the lack of an adequate response from the Mesquite Police Department resulted in Ashton’s death,” the statement said.

Ashton was in no way armed with a shotgun or deadly weapon to justify the use of deadly force to officers on the ground. My office is committed to investigating all civil rights claims made by the Ashton family and requires full transparency in all future police investigations.