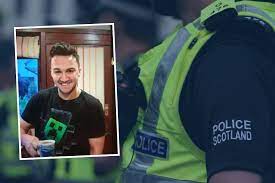 Who was Cain Poulsen ?

Police are “increasingly concerned” about a missing 24-year-old Australian man who recently moved to Scotland and was last seen in Perthshire.

Cain Poulsen was last seen around 12 p.m. Tuesday in the Main Street area of ​​Callander.

A public post shared on social media by his sister Alexis Poulsen said her little brother recently moved to Paisley and was working at an Apple store in Glasgow. She said his last known location was an address in Callander.

He is described as a white male, around 5 feet 6 inches tall with short brown hair and brown eyes. When he was last seen, Cain was wearing a beige padded jacket, black jeans, a black or plaid shirt, and Timberland-style boots.

Inspector Bill Donohoe of the Forth Valley Police Division said: “We are increasingly concerned about Cain and are asking for the public’s help in locating him safely.

“Formal identification has yet to be done, however, the family of Cain Poulsen, 24, who had been reported missing in Callander, was informed.

“Investigations are underway to establish the exact cause of death that is not considered suspicious.

“A full report will be sent to the Attorney General.”

Bracklinn Falls, where Cain had been before he disappeared, has been the scene of several tragedies in recent years.

In July, a man died after falling ill in the beautiful place.

And two years ago, a student died after a tragic accident in a waterfall.

“Anyone with any information is asked to come forward and speak to the officers.”