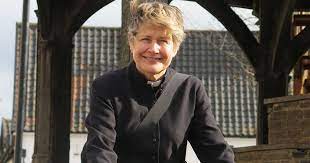 A vicar involved in a bitter dispute with the choir of his historic church has accused his bishop of waging an “unethical, immoral and self-serving” campaign against him.

The Rev Catherine Relf-Pennington, 64, alleged that the Bishop of Norwich, the right Rev Graham Usher, had sided with “a small circle of highly networked, rich, white men” rather than support his own. clergy.

In an extraordinary attack, she accused him of hypocrisy by claiming that he had “stalked” her just after she had publicly attacked “the dark forces of cruelty” who attacked television personality Caroline Flack before taking her own life. .

The raid began after Ms Relf-Pennington faced a series of complaints about her alleged “authoritarian style of hers” in 2017, shortly after she was made vicarage of 12th-century Wymondham Abbey, Norfolk.

They included claims that she assaulted a choir member after barring him from the choir and backed her truck into a parked car in Abbey’s parking lot, causing a ‘six-inch-long wound’, before driving off.

Mrs. Relf-Pennington, in turn, claimed to have been intimidated and subjected to false accusations by choristers who were “anti-women priests”.

She also alleged that she received letters with a poison pen and that the tires of her truck were slashed.

The Rt Rev Usher attempted to defuse the dispute by issuing ‘instructions’ last November, including an order to apologize ‘unreservedly’ to those who had complained ‘in order to achieve reconciliation’.

His seven-page report also called for measures to improve the functioning of the parish and address concerns about the Abbey’s finances, caused in part by his declining congregation.

Ms. Relf-Pennington, the first female priest in the Abbey’s 900-year history, did not respond to the report last November, but she has now published her own 12-page statement on the Abbey’s website.

She said that she and her parish church council and church wardens, as well as the ‘worshiping community’, had been shocked and disappointed by the actions of the Rt Rev Usher and other diocesan officials ‘in relation to her behaviour. ‘.

The vicar said: ‘There have been false accusations, delays and incessant threats and criticism from a church community that is doing the best it can in very difficult times and is widely appreciated by other groups.

‘We have been harassed. For three years, the pressure here has been relentless. We believe that the intention has been to break the vicar, to break the PCC people and to break the worship community.’

Mrs Relf-Pennington also criticized the Bishop of Thetford, the Right Reverend Alan Winton, saying that he had been wrongly given the vicarage of the abbey to live in, meaning that she was offered other accommodation.

She said: ‘The behavior of Bishop Alan Winton and Bishop Graham Usher in relation to Wymondham Abbey is unethical, immoral and selfish.

They have caused a great deal of damage to the reputation of the Church of England, to the people of Wymondham, and in particular to the members of the church council, the faithful, the vicar and the wardens.

“Throughout all these processes, the Diocese has listened much more to some people, in particular, to a small circle of highly networked, wealthy white men, all hostile to the vicar, who have great influence in the affairs of Wymondham. Abbey and in the leadership of the Diocese.

“It is time to call this to account and ask the Church of England to make its position on Freemasons within the church open and transparent.”

Ms Relf-Pennington described the Bishop’s report as “the latest in a long line of abusive Church of England processes used by Bishops against the Vicar and Wardens”.

She said: ‘At no time did I raise my voice, even in the face of a very emotional outburst from (her)… At one point I placed my open hand, relaxed, gently near her upper arm* I was trying to guide her to a seat and offer you tea.

“I don’t yell and I can’t imagine ever being described as fierce, abusive.”

The bishop said no further action would be taken apart from a claim that the vicar damaged a parishioner’s car, which should be referred to a church tribunal.

But he said it was “highly unlikely” that his truck was involved in the parking lot collision, as it showed no signs of damage.

The Rt Revd Usher also revealed that the parish had not paid its dues to the Diocese’s funds for 2020 and initially in 2021, saying “it may suggest that the financial position of the parish has fallen into a state of disorder.”

But Ms. Relf-Pennington alleged that the church’s accounts had been left “in a disorganized and confused state” before she took office and that the Abbey’s reserves had been depleted in previous years by being used to make payments to the Diocese.

The bishop’s report described Mrs Relf-Pennington’s insistence on wanting to stay in the old vicarage as “irrational and unsupported by legal opinion”.

The Church of England hired former High Court Judge Sir Mark Hedley in 2019 to investigate ill feeling at the Abbey.

Sir Mark urged both sides to resolve their differences to avoid a public court hearing and described the ongoing problems in his report as “a disgrace to a Christian community”.

The Diocese of Norwich said in a statement today that the vicar had a legal duty to comply with the bishop’s instructions and that failure to do so could lead to disciplinary action for misconduct.

It read: ‘The Bishop of Norwich takes note of the response of the vicar and wardens of the Wymondham church to his instructions issued in November, following the formal visit to the parish during 2021.

“The visit itself was commissioned due to a number of concerns related to the ministry of Wymondham Abbey.

‘So far, several of the Bishop’s instructions remain to be fulfilled, and he will work to ensure these matters are properly addressed. The Bishop is very interested in settling matters in Wymondham for the benefit of the entire community.’