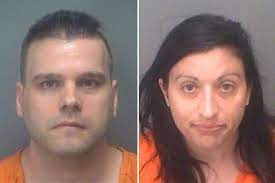 Who is Christina Calello?

Christina Calello, 36, “voluntarily engaged in s*xual activity with the dog on multiple occasions” over the course of approximately eight years, according to the Pinellas County Sheriff’s Department.

Her former lover, 39-year-old Geoffrey Springer of Largo, allegedly recorded the encounters and stored them on a hard drive.

The dog, which had no visible injuries, was taken to an animal hospital by officers for a routine exam.

Police did not disclose the nature of the s*xual acts.

The couple was booked into the Pinellas County Jail and charged with s*xual activity with animals.

Calello, a New Jersey native who lives in Safety Harbor, posted $5,000 bond and was released, county jail records show. Calello was also arrested and charged with domestic battery in May.

A Florida woman was arrested Tuesday for allegedly committing s*xual acts with her dog while her ex-boyfriend, who was also arrested, was videotaping, police said.