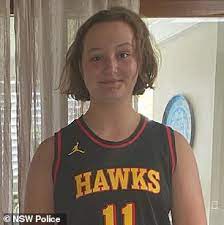 Who is Chrystal Pappas ?

A teenage girl had gone missing while walking her beloved dog in western Sydney, prompting an urgent police search.

Chrystal Pappas, 15, was last seen leaving her home on Hilliger Road, South Penrith, with her Labrador retriever around 7:30 a.m. Monday.

After being unable to return home, Chrystal was reported missing to the police, who began efforts to find her.

The family and the police are concerned for her welfare due to her age.

Chrystal Pappas, 15, was missing for almost 12 hours after disappearing while she was walking her dog in western Sydney.

She is described as Caucasian in appearance, about 170 cm tall, of medium build, with shoulder-length brown hair and brown eyes.

Ella Chrystal was wearing a black Atlanta Hawks basketball jersey with the name ‘Young’ and the number 11 on the back, denim shorts and white basketball shoes.

She was walking a blonde lab.

Anyone with information on Chrystal’s whereabouts is asked to call Crime Stoppers on 1800 333 000.