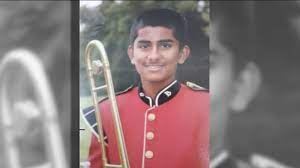 An 18-year-old in Bergen County, New Jersey apparently drowned in a pond on Friday.

A day after the tragedy, candles were lit near the water’s edge, a small tribute to a young life that ended too soon.

“He was a passionate kid. He had his whole life ahead of him. He was 18 years old,” said Aram Bavoukian, a senior at New Milford High School.

It was around 7 p.m. on Friday, when 18-year-old Clinten Ajit waded into the icy water of Hard Castle Pond near Dorchester Lane in New Milford.

Witnesses say he went in to retrieve a soccer ball.

“The water was up to his waist, then it was up to his neck, then he had his whole body in the water,” 10-year-old Sam Rueda told CBS2’s Nick Caloway.

Sam was with his family, watching the tragedy unfold. Sam’s father gave CBS2 permission to interview the boy.

“After he put his hands down, that was the last we saw of him. Then his friends started panicking,” Sam said.

People living near the pond heard the sirens as rescuers appeared.

“Next thing you know, they were putting the boat in the water. They dropped the boat, then another boat. The guys were getting dressed,” said neighbor Steven Cerenzio.

Ajit was a senior at New Milford High School. His friends say he was smart and kind, and his classmates don’t think so.

“Everyone is in shock,” Bavoukian said. “Like, it was so quick. You go from, like, we all had class with him a couple of hours before.”

Friends of the victim, along with strangers, brought flowers to the pond Saturday for a small but growing memorial.

“I don’t know. I just want the family to know they are in my prayers. I was up all night thinking about that poor mother and what she went through,” said neighbor Mary Lukas.

In a statement to CBS2, New Milford Mayor Michael Putrino said, “Our community is heartbroken and the Ajit family is in our thoughts and prayers. Words cannot describe the pain this family is going through at this time.” moment”.

Signs posted at the water’s edge say that swimming is prohibited.