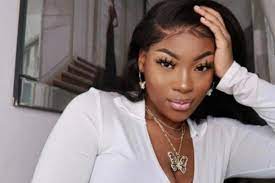 A 23-year-old business law student who died after eating an alleged cannabis candy has been photographed.

Damilola Olakanmi, from Ilford, east London, bought the gummies through a messaging app and had them delivered to her home where she fell ill last Tuesday.

The University of Hertfordshire student was rushed to Queen’s Hospital, Romford, at around 11.30pm. m., but died on April 2.

Her 21-year-old friend, an American student visiting the UK, was also seen by doctors, but she was released after treatment.

Ms. Olakanmi’s mother, Wumi, 51, had kept a vigil at her bedside until she passed away on Saturday night.

His friend Richard Taylor, 75, told the Standard: “Wumi has lost his only son, now he has nothing.”

“They had to hold her up because she would break down every time a friend came to her house to support her.

“It is a tragic warning to all young people about how they live their lives. They must resist drugs.

‘Damilola was a promising young woman who should look to her future and have her own children of her own. She was studying law.

Leon Brown, 37, of South Norwood, was arrested Friday in connection with the incident.

The Met said he was found in possession of a large amount of cash and what were believed to be edible cannabis products.

Chief Superintendent Stuart Bell, of the Met’s East Area Basic Command Unit, said: “I must warn the public not to take illegal substances, including those packaged in the form of cannabis candy.”

‘Please do not buy or consume these products. They are illegal and, due to child-friendly packaging, may pose a risk of accidental consumption.

“The particular batch of candy was contained in packaging marked Trrlli Peachie O.

‘It has not been confirmed at this stage where the sweets were made. Drug traffickers damage communities and put people’s safety at risk.

“We will take positive steps to target those who participate in this activity, as well as those found to be in possession of these substances.”