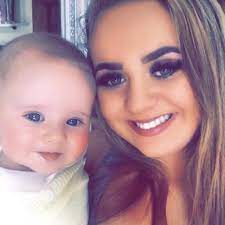 Who is Darci Topping ?

A nursery worker who told her bosses she was pregnant a week after starting her job won £25,646 after being asked if keeping her baby was a “good idea”.

Darci Topping, 23, was subjected to ‘negative inferences’ about her pregnancy by her managers at Stepping Stones Nursery in the Lancashire village of Hoddlesden.

They asked her about the baby’s father and his intention to continue the delivery.

Then Miss Topping was ‘pressured’ to reduce her hours during the Covid pandemic before being fired out of the blue, she heard an employment tribunal.

The court ruled that her bosses had “disguised” her dismissal with a false process because she was pregnant.

Miss Topping, who now has a one-year-old son Stanley, has now received £25,646 after she successfully sued the nursery in employment court for pregnancy discrimination and unfair dismissal.

The court in Manchester was told that the qualified nursing nurse, Miss Topping, started at the nursery near Blackburn on February 24, 2020 on a 37-hour-a-week contract.

A week later, on March 2, Miss Topping, from Blackburn, announced to her line manager Zara Costello that she was pregnant with her first child.

A court report said: “A few days later, in the course of an argument about her pregnancy, Mrs. Costello told him that Julie Mercer, the owner of the nursery, “would notice”, and she mentioned the fact that Miss Topping was on probation.

“Other comments were made, including questions about whether Miss Topping was, in fact, going to keep the baby and if that would be a good idea, and reference was made to Miss Topping’s partner or the baby’s father at the time. “.

When the Covid-19 pandemic hit days later and Stepping Stones Nursery became concerned with finances, Miss Topping was told her hours needed to be reduced to 20 a week and no consultation was given.

Miss Topping was “anxious” about the impact of the pandemic on her health and whether or not she would have a job, the court heard.

She was initially placed on sick leave, but was later placed on leave, as were other members of her staff.

However, she was the only one who received 80 percent of the salary for 20 hours a week, instead of 37.

Even though things were ‘stable’ at the nursery, she was fired out of the blue while she was on leave, leaving her ‘very upset’.

Ms. Costello even suggested that she “might be better off with benefits” during the phone call.

The report said: ‘By April 20, 2020, the number of children attending day care every day had stabilized.

By this time, Miss Topping was on leave with other employees at no charge to the nursery.

‘What happened then was that Mrs Costello simply called Ms Topping and announced her dismissal as (dismissal).

‘From the evidence presented, the Court found that the nursery covered up her dismissal by constructing a dismissal process that was never carried out or was carried out after the nursery made the decision to dismiss her.’

Miss Topping brought legal action, claiming that the nursery “had a problem with pregnant employees”.

Labor Judge Marion Batten said: “The Court concluded that the decision to dismiss her was a decision directed at her alone: ​​she was pregnant and, in light of the paucity of evidence, it was clear that that was the only difference.”

‘There was no other credible explanation offered by the nursery.

‘The Court did not hesitate to conclude that her dismissal was related to her pregnancy.

Only she was fired. She was the only employee who was pregnant, and in the context of the nursery’s treatment of her since she told them, in early March 2020, that she was pregnant.’

After the case, Ms Stanley said that she is “glad we won the court”.

She added: ‘It was very difficult for me to be let go at such a vulnerable point in my life while expecting my first baby, so I wanted to be excited.

“I feel that justice was served to me and I am relieved that the case is finally over.”