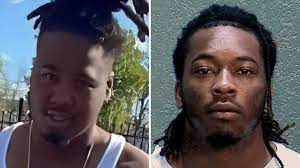 A third suspect has been arrested in connection with a mass shooting in Sacramento that left six dead and 12 injured, police said.

Detectives recovered a handgun and arrested 31-year-old Daviyonne Dawson Monday night on charges of being a prohibited person in possession of a firearm, the Sacramento Police Department said.

Detectives allegedly identified him as a man who had been seen carrying a gun immediately after the shooting early Sunday in downtown Sacramento.

He was arrested Monday night and booked on suspicion of being a prohibited person in possession of a firearm.

“At this time, Dawson is not charged with crimes directly related to the shootings,” according to a police statement Tuesday afternoon.

Dawson is not charged with carrying out the shooting or any crime directly related to the shootings.

“Based on the type of firearm recovered, detectives do not believe this weapon was used in the shooting,” the Sacramento Police Department said.