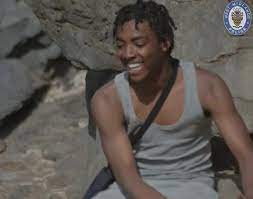 Shocking footage shows the moment a 17-year-old was chased down the street by a teenage thug who hacked him to death with a Rambo knife.

Derlano Samuels, 17, had taken refuge in a store after being stabbed in the street by Cam-Ron Dunn.

Dunn, 18, attacked Derlano with a ‘Rambo-style’ knife before escaping by bicycle on May 1 last year.

An autopsy showed that Derlano had died of a stab wound to the chest after the attack in Smethwick, West Mids.

He also revealed that he had suffered multiple stab wounds to his body, including one that left the point of the knife lodged in his skull.

Dunn, from Smethwick, denied murder, but it took a jury just 90 minutes to return a unanimous verdict of guilt following a trial at Wolverhampton Crown Court.

Derlano tried to take cover in a store as Dunn chased

West Midlands Police have released footage of the moment Dunn lunged at Derlano before chasing him to his death.

After being stabbed twice, an injured Derlano tried to take cover in a store as Dunn chased after him, cornering him in the warehouse and repeatedly stabbing him before running off.

Nursing his injuries, Derlano also made it out of the store and got into a car parked outside that drove away from him.

Minutes later, officers found Derlano lying on the ground in Heath Street, Smethwick, next to the vehicle after it was reported that he had crashed there minutes earlier.

Officers administered first aid before paramedics arrived to take charge and the teen was rushed to hospital but was sadly pronounced dead about an hour later.

An autopsy showed that Derlano had died of a stab wound to the chest. It also revealed that he had suffered multiple stab wounds to his body, including one that left the point of the knife lodged in his skull.

Meanwhile, Dunn was caught on CCTV running to another shop where he hid the knife in his pants and fixed his hair before calmly retrieving his bike and heading home.

After examining CCTV recovered from the store, a police officer recognized the killer as Dunn.

He was arrested at his home at 1:20 am on May 2 and officers found a freshly laundered tracksuit that Dunn had worn on the day of the murder.

Officers also found a stab-proof vest and knife sheath in the downstairs bathroom along with two machetes hidden in a barbecue and one under the living room sofa.

Detective Inspector Hannah Whitehouse said: “The brutality of this attack is shocking.

Derlano was stabbed in the street and then clearly tried to run from the attacker on him.

Dunn gave chase and subjected him to another vicious knife attack as they cornered him.

It is unclear what caused this horrific violence to break out, but it has resulted in another family losing a loved one, and our thoughts remain with them.

“It is also another sad reminder of the dangers of carrying knives and we hope that this conviction can provide Derlano’s family with some consolation that Dunn is now off the streets and behind bars.”

In a tribute, Derlano’s family said: ‘Derlano was a happy, positive, thoughtful and warm-hearted person.

He had his life taken before his 18th birthday in a senseless act at the hands of another. His family and those who knew and loved him will forever miss him.

‘Young people today think that carrying knives will protect them, but in reality they are putting their lives in the hands of the law.

“Knife crime is a pandemic in the UK, the impact ripples through families and communities and cannot be underestimated.”

Dunn was taken into custody and will be sentenced on May 13.