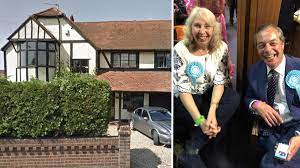 A former model and UKIP councilor has been kicked out of her £800,000 home after losing an inheritance battle with her stepchildren despite begging the judge to “please help me” in a handwritten letter.

Diana Dale-Gough, 71, lived in the sprawling four-bedroom Berkshire estate with her husband Peter de Ella until her death in August 2013.

During their eight-year marriage, the couple had lived together in the four-bedroom family home in Burnham, Slough, which was in the sole name of Mr Dale-Gough and was the principal asset in his estate.

Under his 2005 will, her wife was granted the  to live on the property for the rest of her life.

She stated that if the house were eventually sold, either when she moved out or consented to it, the proceeds would be divided between Mrs. Dale-Gough and her two children, Ben Dale-Gough and Mary-Gough. Jane Pettit.

But the case ended up in court when Mrs Dale-Gough brought a claim against her stepchildren in Slough County Court, seeking further provisions from her late husband’s estate.

Ms Dale-Gough’s claim was set aside in 2020 and she was ordered to pay legal costs incurred by her stepchildren, which with interest now total nearly £100,000.

But the former catwalk and photo model, businesswoman and restaurateur made an impassioned plea before a judge when she was threatened with eviction to pay her costs.

In a handwritten letter delivered to the court, he complained of “stress and anxiety” over the threat of losing his home and begged the judge in a letter to “please help me”.

Attorney Aidan Briggs argued that despite his pleas, the court should order the house to be sold, since the only other way the brothers would see their money would be by having their stepmother file for bankruptcy.

Deputy Master Marsh has now dismissed Mrs. Dale-Gough’s case and granted an order allowing her stepchildren to sell the single-family home so they can pay debts their stepmother owes them.

The court heard how Mr Dale-Gough, also a Conservative councilor and former director, died in hospital aged 74 in August 2013 after collapsing while playing golf with friends.

Hundreds of people attended his funeral, paying tribute to the ‘cherished, wanted and loved’ champion of the community, who had for a time been leader of the Conservative caucus in Slough.

Julian Reed, who was representing Mrs Dale-Gough in court, argued that by ordering the sale of the house without her consent, the court would go against her late husband’s wishes as set out in his will.

He said: “The decedent clearly foresaw the protection of the defendant so that she could live in the property with a life interest.”

Mr. Reed also described how she had been living in the house for many years and now she is “very vulnerable” as she is confined to her house and suffers from multiple sclerosis.

She told the court: ‘What is sought cuts across the intent of the deceased. He would have known both my client’s age and the fact that he has multiple sclerosis.

‘This is a very vulnerable defendant, who needs to be protected.

“It’s only fair that my client stay living on the property as long as he can and he can.”

But in urging the judge to allow the sale so that the stepchildren can be paid the nearly £100,000 owed, Briggs said delaying matters would only make matters worse as the debt continues to mount by the day.

He added: ‘My clients honestly believe that she has no other assets that she can fall back on, so the debt continues to accrue interest and continues to grow,’ she said.

‘My clients are substantially out of pocket for her in the meantime.

‘If the court makes this order, the property can be sold. Half of the proceeds can be applied to the debt and then the balance, which should be more than £250,000, is given to Mrs Dale-Gough for her to make new accommodation arrangements.

‘The property is much more substantial than would be required for a single person. It is a family house.

“The more this debt grows, that can only work to the detriment of this defendant over time.”

Finding in favor of the stepchildren, Deputy Master Marsh said that Mrs. Dale-Gough had caused the whole situation because of her conduct during her failed claim against her stepchildren.

She said there had been a “very considerable degree of noncompliance” in not filing documents when she was required to and then a “lack of cooperation” in paying attorneys’ bills.

The court heard that she had not even participated in the proceedings related to the forced sale of her house, until at a late stage she wrote to the court begging a judge to help her.

The judge continued: ‘Mr. Dale-Gough’s intention was that his wife should have the opportunity to reside on the property during her lifetime, subject to certain conditions.

‘It is also correct that, with his consent, a sale of the property could take place and, if that sale did take place, there was an arrangement under which part of the proceeds would be available for the acquisition of an alternative property .

‘It follows that the intentions of the deceased were not absolute. He contemplated the possibility that there might be a sale of the property during his lifetime.

“There is now a long-standing personal debt, which by any standards is substantial.”

He said the court will now use his power to “consent” to a sale on behalf of Ms. Dale-Gough.

Deputy Marshal Marsh concluded: ‘The main consideration I have had in mind, while carefully considering your circumstances, is that the debt which has arisen is a direct consequence of the manner in which you conducted the Inheritance Act proceedings.

“Furthermore, she has done nothing to improve or mitigate the situation since those proceedings were lifted.

‘In my view, the balance is tipped strongly in favor of the claimants being entitled to recover the debt arising from the court proceedings which has now been pending for a long period of time.’