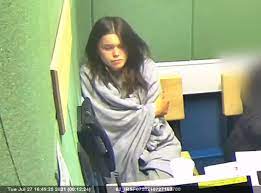 Two thugs and a ‘sadistic’ teenage girl have been found guilty of murdering a psychiatrist father of two during a brutal ‘homophobic attack’ in a park.

Dionne Timms-Williams, 17, laughed as she punched and kicked Dr Gary Jenkins, 54, a father of two, during a brutal robbery in Bute Park, Cardiff, on July 20 last year.

Timms-Williams, who was only 16 at the time of the attack, claimed in court that he participated in the attack along with strangers Jason Edwards, 25, and Lee Strickland, 36, because he feared for his life if he did. . not join

Consultant psychiatrist Dr Gary Jenkins, 54, was ‘brutally attacked and tortured’ in Bute Park, Cardiff.
The teenager, who lived with her mother, a company director, in the village of Creigiau in the Vale of Glamorgan, was known to have had a homosexual relationship, leaving neighbors baffled when asked about it. homophobic attack.

Dr. Jenkins had visited Bute Park that night “in search of sexual contact with other men”, and the three defendants were looking to rob “vulnerable gay men who were in the park to have sex”, it was previously told. Merthyr Tydfil Crown Court.

Prosecutors said the top psychiatrist was “brutally beaten, robbed, tortured and left for dead” as the trio of thugs warmly embraced each other as they used his stolen bank card to buy alcohol.

Dr. Jenkins yelled ‘get off me’ and ‘please stop’ as he repeatedly asked why his attackers had attacked him, further humiliating him as his blood-soaked pants were pulled down to expose his penis.

Meanwhile, chilling audio and security camera footage show the trio encouraging each other as they shout “head stamp” and “keep going” during the 15-minute assault.

After killing the psychiatrist, his attackers used the dead man’s bank card to buy alcohol at a nearby Esso Garage, before Edwards and Strickland took a drunken ride around town on a rented scooter.

Jurors viewed key moments from the night’s attack during the trial, including a body camera clip of Strickland’s arrest and Timms-Williams’ police interview in which he declined to comment.

The court heard that Dr Jenkins suffered “insurmountable brain damage” after he was “beaten, tortured and left for dead” and sadly died at the University Hospital of Wales two weeks later on 5 August.

The three defendants were found guilty today of the murder of Mr. Jenkins after an eight-day trial, after initially admitting to involuntary manslaughter charges, and are due to be sentenced at the end of March.

The teen gave a prepared statement to police to say that she had only met the couple that night and that she was “traumatised” by her actions.

She said: ‘I saw one of the men throw a punch. I saw him fall to the ground. They were both kicking and punching.

‘They said ‘let’s go’, for me to join. I was terrified and feared for my life. I thought that if I didn’t do what he wanted, he would die. He couldn’t believe what was happening.

‘I have never been alone in the city center at night. I have never witnessed anything like this in my life.

Edwards and Strickland were ejected from the courtroom after they appeared to laugh and joke with each other in the dock as the guilty verdicts were handed down.

In a statement after the verdict, Iestyn Wyn, campaign, policy and research manager at Stonewall Cymru, said: “Lesbian, gay, bisexual, trans and queer people should be free to go about their lives without fear or restriction, but the Dr. Jenkins’ tragic death is a reminder of the hatred our communities face for simply existing.

“The comments made during the trial have further eroded the trust our communities have in our justice system, where four in five (81%) of LGBTQ+ people no longer report hate incidents to the police.

“As people across the UK mourn the heartbreaking loss of Dr Jenkins, the government must take urgent action to challenge anti-LGBTQ+ attitudes and ensure all our communities are safe and free.”

CCTV footage from the scene captured a 15-minute audio recording of the attack as Dr. Jenkins pleaded for help.

The teen can be heard screaming ‘do it’ in the chilling footage and calling Dr. Jenkins a ‘fucking pig’ before leaving him for dead in a park before being caught on film hugging her accomplice Jason Edwards.

Timms-Williams lived in her house in the suburban town of Creigiau, near Cardiff, with her mother, a company secretary at a popular Newport restaurant.

But she went out ‘to attack someone for robbery and violence’ in the early morning hours of July 20 last year, the court heard.

Reacting to the murder, a neighbor said: “Before the lockdown she was just an ordinary girl, she now she has killed someone in the most horrible way.”

Her family will be horrified. They always seemed so nice and normal.

Timms-Williams, who has a passion for horse riding, was spotted wearing black knee-high socks as she made her way to Bute Park near Cardiff Castle.

She was recorded before the attack herself saying: ‘If we’re going to stay in fucking Bute Park, can we at least go robbery?’

Horrified witness Louis Williams described the teen as “fucking evil and sadistic” after he desperately tried to intervene.

Timms-Williams, who was only 16 at the time, was later arrested by police along with Edwards and Strickland for the attack on Dr. Jenkins.

It is believed that Timms-Williams, who was 16 at the time, did not know the two of her co-defendants of hers before that night.

After meeting them on Queen Street and accepting a can of cider, she walked with them to Esso’s garage on Cathedral Road, where she paid for more cans of alcohol.

The trio then entered Bute Park and spent time in the seating area outside the Summerhouse Cafe, facing the Millennium Bridge.

A key piece of evidence for the prosecution was an audio recording of the attack taken from a CCTV camera located inside the cafe.

The court heard that the teenager admitted to punching Dr. Jenkins once and claimed that she kicked him “a few times” but insisted “it wasn’t hard kicks”.

Timms-Williams said he met the two men overnight after Edwards introduced himself as ‘Scouse’ and gave him two cans of cider.

She said: ‘I didn’t think Dr Gary Jenkins would be seriously hurt.

‘I was too scared to ask for help for him. I think they will persecute me and hurt me or my family. I was afraid that I would be attacked immediately if he tried to escape.

The trial previously heard that the bisexual Dr. Jenkins had gone to the park looking to meet men.

Prosecutor Dafydd Enoch QC said: “He was beaten apparently motivated by greed, homophobia and an outright taste for violence.”

Dr Gary Jenkins was in Bute Park in the early morning hours of last July when he was mugged by Jason Edwards, 25, Lee William Strickland, 36, and a 17-year-old girl.

Witness Louis Williams desperately tried to save Dr. Jenkins during the attack and was assaulted himself. He described the girl as: ‘Fucking evil. Sadistic.’

After his arrest, Mr. Edwards told detectives, “He wasn’t in this fucking dirty park.” So listen to my words now, yes I’ve heard your words, I wasn’t there, yes I wasn’t there. I was in my friend’s place, like I told you.

Edwards was asked by a detective why it was a ‘dirty park’ and he replied, ‘A dirty park? Well, what do you say happens in there?

‘So why would I, a straight person, walk around a gay park at night?’

A detective asked Edwards, ‘Did you say it makes you uncomfortable?’

He replied: ‘It makes me uncomfortable, yes, of course it does. In my eyes it is dirty.

Thomas Edwards, CPS Senior Crown Prosecutor, said: “The level of violence from all three defendants was truly shocking, and the evidence showed that they seemed to enjoy the cruelty of what they were doing.”

“Throughout the court process, our thoughts have remained with the family and friends of Dr. Jenkins, whom we clearly miss.”