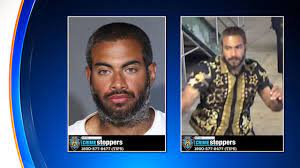 Donny Ubiera, a suspect wanted in connection with a pair of robberies in the transit system, has been arrested and charged with attempted murder.

Police said they took Ubiera, 32, into custody on Saturday after he allegedly slashed one person’s face and stabbed another in the neck at subway stations in Queens.

Ubiera was charged with two counts of attempted murder, assault and criminal possession of a weapon.

Donny Ubiera, 32, was arrested Saturday and charged with two counts of attempted murder, assault and criminal possession of a weapon.

The Queens resident was wanted in two separate attacks on subway trains in Queens.

Police said the suspect, who was holding a large knife, approached a 62-year-old man and cut him across the face and hand. Police said the assault was unprovoked.

The suspect got off at the station and fled. The victim was taken to the hospital and received stitches.

A second attack occurred around 7:15 a.m. Saturday on a northbound 7 train platform at the 74th Street-Broadway station.

Police said the suspect, again with a large knife, approached a 55-year-old man and unprovokedly stabbed him in the neck before running from the station.

The victim was taken to hospital in critical but stable condition and police recovered a knife at the scene.Ubiera is from Queens, police said.