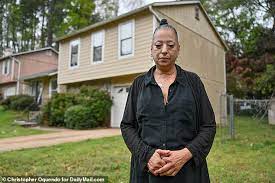 A father was arrested and charged with murder after his 8-year-old son shot and killed his 6-year-old little brother with a gun found on the floor of a bedroom inside their home in Stone Mountain, Georgia, on Friday. .

D’onte Patterson, 29, was charged with murder, cruelty to children, possession of marijuana and possession of methamphetamine after taking the youngest son, V’Onte, to the hospital after he was shot by his older brother.

A neighbor, who did not want to be identified, told DailyMail.com that it was an AR-15 that was used in the shooting, which police believe was an accident.

The neighbor said there were seven children in the house and that the children’s father and uncle were downstairs at the time of the incident.

They said V’Onte was shot in the mouth and the boy’s father and uncle took him to the hospital, where he was pronounced dead.

The neighbor added that the gun used in the shooting was allegedly loaded and on the floor next to the bed in an upstairs bedroom when the 8-year-old boy found it and shot his brother.

Patterson confirmed the gun was hers and that her children found it on the bedroom floor, police said.

The DeKalb County Police Department said the investigation is ongoing as they question the occupants of the home. Authorities confirmed that seven children and four adults occupy the house.

Another neighbor, Annette Barber, 62, who has lived in the neighborhood for more than 20 years, told DailyMail.com that she came home to see police cars, news and FBI helicopters, and a detective from the Police told him that a boy had been shot at his neighbor’s house.

“They were all playing with her grandson in her backyard the day before yesterday,” she said.

Barber added that the family had not been living in the house for more than a year and she also heard that her older son found the gun and shot his younger brother V’Onte in the mouth.

“It’s heartbreaking and my heart goes out to the family,” Barber said. ‘It’s such a tragic loss. My heart aches deeply.

Another neighbor, Hiram McDonald, also lamented the tragedy that hit the family.

“I wish it had never happened,” McDonald told Fox 5. “I loved the guy. Like I said, he was like a son to me. I hate that it happened.

Parrish Hurst, who lives across the street from the Pattersons, echoed the anguish.

“My heart really goes out to the family for their loss,” Hurst told 11 Alive, because we really have to watch our kids these days.

‘They get into so many things, so fast. So we can’t take chances with our children. So my heart goes out to the family for their loss.