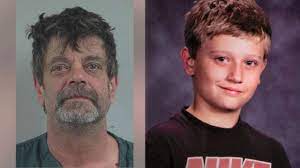 Who was Dylan Redwine ?

A Colorado father has been convicted of his son’s murder after the child found photos of him wearing a red bra and eating feces from a diaper.

Mark Redwine, 59, was found guilty by a unanimous jury on Friday and found guilty on second-degree murder and child abuse charges that resulted in the death of his son Dylan Redwine in 2012.

He faces up to 48 years in prison for the murder conviction and his sentencing hearing is set for 9 a.m. of October 8.

Redwine was charged in 2017 in connection with the disappearance of 13-year-old Dylan, who was reported missing on Nov. 19, 2012, while on a court-ordered Thanksgiving visit to his father’s suburban home. of the city of Durango.

The boy’s father showed no visible reaction when the verdicts were read as he stood with folded hands in front of him.

Before the verdicts were read, Redwine fidgeted nervously with his tie as he wore a black button-up shirt.

‘This case has taken a lot of resources from across the state, as well as from La Plata County. The planning to make this case go as well as it did was extensive.

The judge added: ‘Emotions are running high on both sides, yet this is a court of law. I hope everyone in this courtroom behaves appropriately.”

The partial remains of Dylan Redwine were found a few miles from his father’s home in 2013. His skull was not found until 2015 when it was discovered by hikers.

Prosecutors argued that Redwine killed Dylan in a fit of rage after they argued over embarrassing photos of him wearing women’s underwear and eating feces from a diaper.

Dylan’s older brother testified in June that Dylan found the photos a year before he disappeared.

The children accidentally discovered the images on his father’s computer during a road trip in 2011 and looked at them in a locked bathroom while his father slept.

Dylan’s brother, Cory Redwine, took his own photos of him to store on his phone. He said under cross-examination that he sent copies of the compromising photos to his father in August 2012, while Dylan and Mark Redwine were alone on a trip together.

Dylan knew about the photos and was not harmed on that trip, despite the text message confrontation between Cory and Mark Redwine.

Cory called his father a “coward who eats (expletive)” and said “you are what you eat,” according to text messages revealed in court in June.

Mark Redwine also called Cory a thief for taking the photos and said he was “trying to hurt him” as was his mother, with whom he was in a contentious custody battle.

Cory had testified that the accidental discovery of photos ruined Dylan’s relationship and his father’s image of him.

“Dylan lost any reason to look up to Mark that day,” said Cory Redwine.

He told the court his younger brother was “quite upset” and said he wanted to use the photos as leverage in an argument with his father a year later.

“Hey send me those poop pictures of dad because he gave me a speech about you guys being a bad example and I want to show him who he really is,” Dylan Redwine said in a text message to his older brother in August 2012, according to documents. judicial.

“He wouldn’t just walk away,” she wrote. He would have called me. I’m very suspicious of you right now. How could he just disappear?

Bogan suggested that her account was tainted by a contentious divorce and custody battle with Redwine. He also suggested that Hall’s appearance on national television turned public opinion against her ex-husband and influenced the direction of the police investigation.

Hall insisted that she spoke to the media and attended a protest at Mark Redwine’s house in an effort to bring Dylan home.

“I thought I was safe because she was with his father, and I was devastated that no one knew where my son was,” she said.

Throughout the trial, prosecutors doubled down on compromising photos of Redwine, arguing that the father-son relationship was in decline long before Dylan’s disappearance. Prosecutors also focused on comments Dylan made to family and friends about fear of court-ordered visitation.

Redwine was arrested in Bellingham, Washington following a grand jury indictment in 2017. At the time, prosecutors said the “compromising photos” were a point of contention between Redwine and Dylan. They did not give more details.