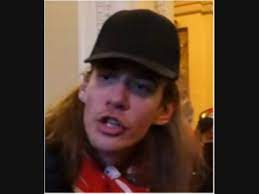 The FBI arrested a Long Island man Tuesday in connection with the uprising at the US Capitol on Jan. 6, 2021.

Eric Gerwatowski, 31, of New Hyde Park, opened a door that police had locked and then ushered protesters inside, prosecutors said.

“Gerwatowski was leading a crowd just outside the Upper House doors. The US Capitol Police were trying to close these doors to prevent more rioters from entering the building. Gerwatowski opened one of the doors that Capitol Police had just closed,” the FBI stated in court documents. “Two officers were standing directly inside and had just tried to secure the entrance, in full view of Gerwatowski and others. Once he opened the door, Gerwatowski turned to the crowd and yelled, ‘Come on!'”

He then led the rioters inside and went inside as well, the feds said, and walked past a police officer, who told the FBI he made a tactical decision not to engage Gerwatowski and other rioters.

“The officer said he made this decision because he had just arrived from the Capitol Gallery area where another rioter, Ashli ​​Babbitt, was shot,” an FBI agent wrote in a court filing. “The officer told the FBI that he was exhausted, outnumbered, and had already been attacked and sprayed with various chemicals by rioters earlier that day.”

Gerwatowski appeared in federal court in Brooklyn on Tuesday to face civil disorder and other charges. A federal magistrate released him on parole, authorities said.

In court documents, the FBI credited information collected and published by a network of online detectives with helping agents identify or track down dozens of people, including Gerwatowski, for involvement in the assault on Capitol Hill.

Twitter users crowdsourced information on the rioters and used the hashtag “#lordlonghair” to organize leads on the suspect the FBI identified as Gerwatowski. The FBI said it reviewed Twitter posts with that hashtag and also received two tips about Gerwatowski from people who said they knew him personally.