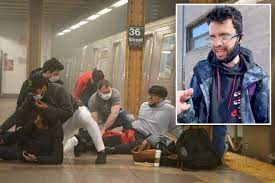 Fitim Gjeloshi, 20, was in the subway car with the gunman, he said. Just before he started shooting, the gunman uttered a strange phrase: …

One guy told The Post he came face-to-face with the mass shooter who opened fire on a crowded subway Tuesday, only to be attacked first by the gossiping maniac.

Subway rider Fitim Gjeloshi recalled how he was on the N train bound for Manhattan just before 8:30 a.m. m. in Brooklyn when he noticed the suspect sitting in the corner, muttering to himself.

“I looked at him and I thought he was talking to himself for a while, so I looked at him and said: This guy must be on drugs,” Gjeloshi said outside the 72nd Precinct in Sunset Park after speaking. to the police on Tuesday afternoon.

As the train briefly stopped underground after exiting the 59th Street station, the suspect suddenly pulled out a gas mask, Gjeloshi said.

“When [the train] was about to reach 36th Street, we stopped for 5 minutes. He takes out a gas mask from one of his small bags,” the witness said.

“He opened up one of his gas tanks and said, ‘Wow, my mistake.’ He pulls out an axe, drops it, pulls out a gun and starts shooting.”

The cyclist claimed the suspect shot him first, but he managed to dodge the bullet and escape unharmed.

Fitim Gjeloshi was on the Brooklyn subway when the suspect in the mass shooting began shooting on April 12, 2022.

“A guy gets shot right next to me. He says: ‘Help! Help,'” Gjeloshi said. “I tell a person to help him, cover the blood for him. I jumped up, hit the door and kicked it with my leg,” Gjeloshi said.

When the train pulled into the 36th Street station, the car was filled with wounded New Yorkers bleeding from the suspect’s hail of bullets.

In all, 10 people were shot and 19 others were wounded, authorities said. Miraculously, no one suffered life-threatening injuries from him.

“I was lucky with that. … It was crazy, man,” Gjeloshi said, adding that he was “scared.”

The unidentified suspect is still at large.