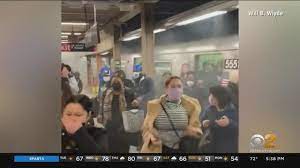 Police have identified Frank R. James, 62, of Philadelphia, as a person of interest in the case. They say James rented a U-Haul van that could be related to the shooting.

Authorities say 10 people were shot and 13 more injured when a gunman set off smoke bombs and began shooting aboard a Brooklyn subway Tuesday morning.

It happened around 8:24 a.m. m. on a Manhattan-bound N train at Sunset Park.

Police recovered a bag filled with smoke bombs, a fuse, an axe, gasoline and a U-Haul truck key in the subway.

Graphic images show the aftermath of violence as victims lie bloodied on the platform inside the 36th Street station.

Police say a man wearing a utility vest put on a gas mask and detonated a smoke bomb inside the moving car.

“The train at that moment began to fill with smoke. He then opened fire, striking multiple people in the subway and on the platform,” New York Police Commissioner Keechant Sewell said.

Josh Aryeh was on board the train when he heard gunshots.

“I just hid. I got out of the way. I tried to make room for this old lady, who even handed me her little pepper spray from her bag in case something happened,” Aryeh said. “She gave it to me from her bag and said: ‘Use it, just in case.’ That’s how desperate people were.”

Video from inside the train shows the chaos as a commuter bangs on the door of a subway car, desperately trying to escape, but the door of the next car was locked.

“There was a lot of blood on the floor, and then, thank God, the train moved within a minute or I don’t know what could have happened if we had been stuck there for too long,” Aryeh said.

NYPD Commissioner Keechant Sewell said at an earlier press conference that the suspect is a roughly 5-foot-5 black man with a heavy build at around 170 pounds. He was wearing a gas mask, an orange and green construction-type vest, neon-green work helmet and a hooded gray sweatshirt at the time.

The gunman had been on the run for hours before police discovered a crucial lead: the truck, which had Arizona plates and was located on West Third Street near Kings Highway on Tuesday afternoon, sources said.

Police launched a massive manhunt for the shooter and revealed that surveillance cameras at the Sunset Park subway station were not working at the time of the robbery. Law enforcement sources told The Post that the cameras tend to go dark “every once in a while.”

Investigators say the gunman, who is described as a black male, 5-foot-5 with a stocky build, emptied several magazines’ worth of ammunition. Police later found a Glock-type pistol inside the 36th Street station.

“A lady was on the ground and blood was coming out of her leg and they shot her. People were screaming for help,” said witness Yahya Ibrahim.

“There were people running out of the train station, bleeding,” added Ijaira González.

Video from Chopper 2 shows the massive police presence that shut down 10 blocks. Bomb-sniffing dogs and counterterrorism units stood by as federal and state officials investigated.