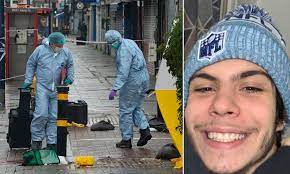 A 16-year-old has been charged with murder after a 21-year-old man was fatally stabbed in south-east London last week.

The boy has been arrested by the Metropolitan Police in connection with the death of 21-year-old Gabriel Petrov Stoyanov in Downham on November 4.

This is the third person charged, after two boys aged 14 and 17 were arrested on suspicion of murder.

The teenager is due to appear at Bromley Juvenile Court on Monday.

A 46-year-old man was also arrested on suspicion of aiding a felon.

The murder investigation was launched after Mr Stoyanov was stabbed to death in Bromley Road, Downham, following an incident at 11.50pm. m. on Friday, November 4.

Police and ambulance workers attended and found the 21-year-old with a stab wound. He was taken to hospital but died the following afternoon.

In a statement issued this morning, the Met Police said: “On Saturday 12 November, a 16-year-old man [D] attended a South London police station.

He was arrested and later charged with the murder of Gabriel Petrov Stoyanov.

He will appear in custody at Bromley Juvenile Court on Monday 14th November.

Gabriel’s mother, Mariana, said: ‘Gabriel was a young man with a bright personality and infinite kindness in his heart.

It was taken from us too soon in the most brutal and cruel way. Gabriel was loved by many, he had a wonderful sense of humor, he was calm, compassionate, always willing to help others.

“We are devastated by the needless loss of him, just as he was beginning his life as a bright, passionate and driven adult.

Forensic officers on the scene in Downham, south east London, the next day.

‘He will always be remembered, and we will carry him in our hearts forever. I am so thankful that God sent him to me.

‘He taught me to be a mother, we grew up together in life. We went through many challenges together, through thick and thin, he made me the person I am today.

‘Gabriel, I love you and I will love you until my last breath.’