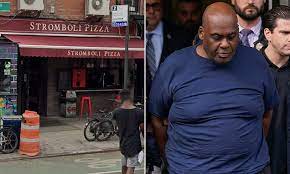 A pizzeria worker near where suspected Brooklyn subway shooter Frank James was found said James entered his establishment early Wednesday morning after wounding 29 people in a volley of gunfire.

James, 62, was crying, according to Hasangjekaj, when he walked in and called for help.

“He was crying like a baby,” said Hasangjekaj, who didn’t recognize James until he saw a photo of him. ‘He says, ‘Oh, I lost my family,’ this and that, and I felt bad. I thought, ‘Whatever, let me help you.’

Hasangjekaj said that he tried to help the mystery man by giving him water and napkins at the time.

‘I asked him three times: ‘Where are you from? How long have you been missing? She did not say anything. It was as if she wasn’t listening to what she was asking him.

James didn’t order food and left about half an hour after his arrival. He apparently told men eating outside Stromboli that he was blind and asked to borrow a phone.

The worker said that before James entered the pizzeria, the suspect told four men eating slices outside that he was blind and asked if he could lend one of his phones.

It’s unclear if any of the men gave his phone to James, but the suspect soon walked into Stromboli and asked Hasangjekaj for his phone, the employee said.

Hasangjekaj gave James his phone number and called a number in Virginia Beach that was listed as belonging to a man and a woman, which is now offline. James said the woman was his wife.

He also tried to message the woman on Facebook, according to Hasangjekaj, but she never responded.

James ominously told police ‘I’ve been waiting for you’ before officers arrested the then-at-large gunman on a lower east side street on Wednesday, it has been revealed.

The prescient phrase, law enforcement sources told The Daily News on Friday, was uttered by the 62-year-old suspect when officers responding to one of five tips about his whereabouts approached James in St. Mark’s Place at approximately 1: 42 pm

When officers arrived on the scene, a law enforcement officer who saw James walking down the crowded sidewalk yelled ‘Hey, Frank!’ the newspaper reported.

At that moment, James slowly turned around and looked at the group of officers, and offered the creepy comment.

James, who had evaded officers for nearly 30 hours before calling police about 12 minutes before his arrest at a McDonald’s on First Avenue, was later handcuffed and taken into custody and is being held without bail.

The bizarre revelation was one of several new details to emerge about the arrest on Friday, as it was revealed that the five informants who reported seeing James strolling through Manhattan on Wednesday will share in Crime Stoppers’ promised $50,000 reward for information leading to upon his capture, each receiving $10,000.

However, at 1:42 p.m. m., cops were finally able to put armbands on James, as the suspect casually walked down bustling St. Marks Place, a couple of blocks from McDonald’s, thanks to Syrian-born security camera company worker Zack Tahhan. of Union City, New Jersey, who recognized the suspect and flagged down a passing police vehicle.

James, who had been charging his phone at a LinkNYC City Internet kiosk when Tahhan saw him, was handcuffed and walked to the local police station, where he was photographed by a rush of photographers and reporters.

When asked why he called to report, Tahhan, 21, said: “If you smoke one cigarette, you’ll want to smoke two cigarettes, you know? Like, this guy will do it again if we don’t catch him, and we catch him! Thanks god!’

“I just wanted to make sure everyone was safe and America was safe before I thought about money,” Tahhan told News Friday. ‘There were other people with me too. They helped.’

Police have since confirmed that the man in the photos was indeed James.

The fifth person has yet to be identified, as recipients of Crime Stoppers bounties are offered the right to anonymity.

James, who dodged cops by changing clothes after the brazen subway attack in which a shooter fired 33 shots, spent the night after the shooting at a Chelsea hostel steps from a police station.

Immediately after fleeing the scene at the 36th Street subway station, James, who donned an orange construction worker-style vest, hard hat and gas mask during the attack, allegedly boarded a southbound R train. for a stop, exiting at 25th Street.