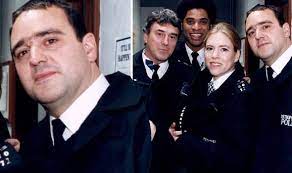 Who was George Rossi ?

Bill’s star George Rossi died at the age of 60.

The actor played DC Duncan Lennox for 20 years on the ITV drama. His death was announced in a statement from his niece on social media.

Rossi died on Wednesday, January 5, and his niece Louisa wrote that she had still been acting “until recently.” The cause of his death is unknown.Rossi, from Govan, Glasgow, is survived by his wife Catrin and two children.

She said: “Unfortunately, George Rossi, who played DC Duncan Lennox, passed away on the morning of Wednesday, January 5, 2022.”

Louisa said that her uncle was still acting “until recently” before his death.

Casting director Claire Toeman also paid tribute by being “devastated” by the passing of her close friend.

She said: “Rest in peace George Rossi, you were the dearest of friends, we will miss you very much.”

“Unfortunately, George Rossi, who played DC Duncan Lennox, passed away on the morning of Wednesday, January 5, 2022,” Louise wrote on Twitter.

“This is my uncle,” she added. ‘He was still acting until recently. He sadly he passed away yesterday morning.

The actor leaves behind his wife Catrine, whom he married in 1988, and his two children Santino and Matilda.

Glasgow-born George made his debut on The Bill in 1993 and would appear in nearly 200 episodes over the next 20 years.

His character first appeared in a 1993 episode before returning as a series regular in 1998. He left the drama in 2003.

He also appeared in a number of other well-known television shows, including Taggart, and the first two Whitechapel series between 2009 and 2010, playing another detective, DC McCormack.

Born in Govan, Glasgow, Rossi was of Italian descent and worked alongside his family on their ice cream van. He was educated at East 15 Acting School in Debden, Essex.

George also starred in the 1984 film Comfort and Joy alongside his brother Peter, and appeared as Kevin in Roughnecks.

The actor appeared in the medical dramas Holby City and Casualty, as well as the television series The Singing Detective, and acted alongside Peter Riegert, Denis Lawson and Fulton Mackay in the 1983 comedy-drama film Local Hero.

In 2013, George appeared as Gianpaolo Albertini on the BBC soap opera Doctors, and in 2011 he played Marco in Hustle.