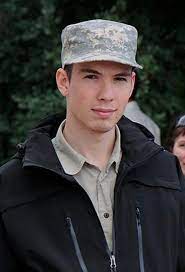 A military correspondent for the Russian state news agency TASS has launched a scathing attack on the ‘crazy’ leadership of Vladimir Putin who is sending his soldiers to ‘murder’ in Ukraine.

Gleb Irisov, 31, resigned and says many of his former colleagues opposed the war, prompting the FSB security service to act.

A former army military translator who served in Syria realized the horror of the invasion on the first day when some of his old comrades had already died, he said.

“I found out that the situation was just horrible,” he said.

‘The leadership went so mad that they simply threw their own army into the slaughter.

Official denials that the conscripts were serving in the war were false, he said.

‘Putin and [defense minister Sergei] Shoigu launched their ill-prepared and ill-equipped army to the slaughter…in a large-scale military conflict in Europe.’

He said that the middle and lower ranks had been against the war.

He spoke amid estimates that the Russian war dead now number in the tens of thousands.

His own experience with the military showed “pervasive servility, corruption and theft,” she said.

Corruption has gone from being a local to a global phenomenon under Shoigu.

“It starts at the bottom: at the level of the brigade, the unit, when the commander subtracts millions in bonds from the budget.”

He revealed that TASS journalists had signed an extraordinary petition opposing the war that led to FSB involvement and critics being branded “traitors”.

But many employees were “brainwashed,” he said.

He claimed that the Russians are told “bulls” on television about the war.

His choice had been to remain in TASS as part of a propaganda machine, or face charges of treason for opposing the Kremlin.

“Become a war criminal or against the state, the choice was obvious to me,” he said.

A prominent TV presenter who resigned from Gazprom-Media’s NTV channel last week said many journalists who spout Putin propaganda do not agree with the war.

“Most of them are not at all sympathetic to what is happening now, all this hell, horror,” said Liliya Gildeyeva, 45, who went into exile with her daughter.

Of the war he said: ‘I wake up every morning with the thought that this cannot be true.

“This is still kind of a delayed effect of trauma, because this shock is getting deeper and deeper.”

When asked what she would say to Ukrainian mothers for the pain inflicted by the war, she replied: “Of course, I would say: ‘Forgive us'”.

But this will not save anyone.

‘Everything that has happened is permanent.

“It will not only affect us, but also our children and grandchildren.”