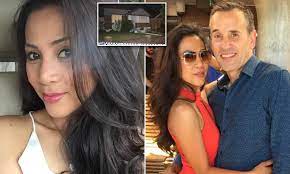 A cleaner blew hundreds of dollars into slot machines minutes before murdering her elderly billionaire client, a jury was told.

Hanny Papanicolaouo, 38, had just $11 left in her bank account after a $430 hour of play at Canterbury Leagues Club in western Sydney.

But a court heard that she knew Marjorie Welsh, 92, had recently received $8 million and went to the elderly woman’s inner west home, where she attacked her on January 2, 2019.

After sounding her medical alarm, Ms Welsh told responders that ‘Hanny’ beat her with her own canes, threw pottery at her and used a kitchen knife to repeatedly stab her in the chest and abdomen, the court heard. .

Ms Welsh died six weeks later in hospital, but she told police it was ‘Hanny the housekeeper’ who brutally attacked her, the court heard.

Papanicolaouo pleaded guilty to involuntary manslaughter on the basis of substantial impairment due to mental abnormality, but this was rejected by the Crown.

The NSW High Court was told that Papanicolaouo did not appear deranged or mentally ill in CCTV footage taken just before her visit to Ms Welsh’s home.

Dr. Martin told the NSW Supreme Court jury that Papanicolaou gave lengthy and detailed responses to police interviewing him 12 hours after the altercation.

Papanicolaou denies murdering Ms. Welsh and said the elderly woman became violent, accusing her of stealing $50, and said that she tried to defend herself against her when Ms. Welsh hit her and threw a knife at her.

But in her June 2020 interview with Dr. Martin, and in an interview with another psychiatrist, Papanicolaou said that she did not remember what happened.

The ‘highly inconsistent’ accounts were in ‘stark contrast’ and simply did not add up, Dr Martin said in court.

During the interview with the police, Papanicolaou did not seem classically depressed, she was “very animated”, coherent and spontaneous, while she gave an exculpatory explanation of the violence.

“I think it can be inferred that she was aware of right from wrong,” Dr. Martin told the jury.

She “she was expressing almost indignation at being falsely accused.”

Dr. Martin noted that in the run-up to the alleged murder, she was described as trustworthy, a hard worker, personable, and a good conversationalist, attributes that were not consistent with having a “significant psychiatric condition.”

Someone with major depressive disorder may appear disheveled, stooped, have very little movement, a flat expression and not participate in the person’s normal activities, she told the court.

Medical records showed that she was screened for depression months before the altercation and her score was zero, while she was reported to have no mental health issues when she was detained.

During cross-examination, Dr. Martin accepted at the time he interviewed Papanacolaou in prison that she did indeed suffer from major depressive disorder.

He also accepted that such a disorder can interfere with memory of past events.

But he said it was “unlikely” that this would have prevented Papanicolaou from remembering what happened on January 2, 2019.