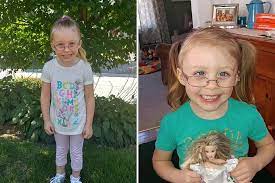 Who is Harmony Montgomery?

New Hampshire authority are expected to provide an update on the investigation into the disappearance of Harmony Montgomery today. Harmony has been missing since 2019, but her disappearance was not reported to police until late 2022.

Harmony’s father, Adam Montgomery, is arrested on charges including not having Harmony in his custody. He pleaded not guilty.

Adam Montgomery’s wife, Harmony’s stepmother, is arrested, charged with welfare fraud for allegedly collecting food stamps for the girl even though she no longer lived with the couple. She pleaded not guilty.

Speaking first to NBC10 Boston, in his first public comments since the mysterious disappearance, Sorey had this message for his 7-year-old daughter: “Hello, honey. If you can see me and hear me, I want you to know that you will never I stopped looking for you and I won’t stop fighting until I find you, okay? Stay strong and mommy is here fighting for you. I love you!

Police investigate at the home on Gilford Street where Harmony was last known to have lived in Manchester for a second straight day.

Investigators brought specialty equipment to the home as part of the ongoing investigation into Harmony’s disappearance. A ground heater was seen parked in the home’s driveway; machinery typically used during winter months to help thaw soil. Crime tape sealed off the sides of the home that lead to the back yard.

Manchester police said the multi-day search at the Gilford Street home was complete, and offered no additional details on what, if anything, was found, citing the ongoing investigation.

Police reports obtained by NBC10 Boston show 29 calls for service to the Gilford Street home where Harmony was last known to live between 2018 and 2020, including domestic incidents involving Adam Montgomery, Kayla Montgomery and other adults in the home.

The New Hampshire Attorney General’s Office said the investigation to date has narrowed the window of Harmony’s disappearance to a period of under two weeks in 2019- Nov. 29 of 2019 and Dec. 10 of 2019.

Adam Montgomery is charged with one count of assault in the second degree for allegedly knowingly causing harm to Harmony by striking her in the face. He was arrested on January 4 with a warrant charging him with felony assault in the second degree stemming from the 2019 conduct against Harmony, as well as one misdemeanor count of interference with custody and two misdemeanor counts of endangering the welfare of a child belonging to his daughter.

Kayla Montgomery is charged with one count of theft by deception, alleging that she lied last year that Harmony was in her home to claim food stamp benefits in excess of $1,500.