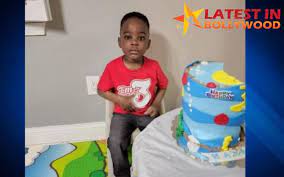 The search for a missing 3-year-old boy Harry Kkonde from Massachusetts who disappeared from his babysitter’s backyard ended Wednesday afternoon with the grim discovery of the boy’s body in a pond.

authorities said, The body of the boy was found in a pond at a Christmas tree farm 650 feet from the nanny’s home in Lowell, about 30 miles northwest of Boston, the district attorney said. Middlesex County district Marian Ryan at a news conference.

“I want to make it clear that we have no idea how Harry got to that pond, where he might have been or how long it took him to get to that pond,” Ryan said.

The boy was reported missing around 9:30 a.m. on Tuesday. Police said a search for the boy was immediately launched.

“Obviously this is every parent’s worst nightmare: a child disappearing for a very short period of time, the excruciating hours of searching and then recovering his body,” Ryan said.

The boy was found in about 5 feet of water near the edge of the murky pond that divers searched for Tuesday, ABC affiliate station WCVB in Boston reported.

Volunteer searcher Kylie Bouley told WCVB that she was searching for Harry in a cornfield near the pond when the boy’s body was discovered.

“She was looking for Him in the cornfield and all I heard was, ‘He’s gone. He’s in the pond. We’re going to get him out. Please get out of the cornfield,'” Bouley said.

“He’s active. He likes to go out. When he’s home, he goes to the garden and plays. He’s a healthy boy but he can’t talk. He’s trying to learn to talk, but he can’t talk,” Harry said. father told WCVB in a phone interview before his son’s body was discovered.

Upon receiving the call of the missing child, officers went to the nanny’s home in the Pawtucketville section of northwest Lowell and immediately began searching the neighborhood. When they found no sign of the boy, they expanded their search to nearby Lowell-Dracut-Tyngsboro State Forest and the Merrimack River.