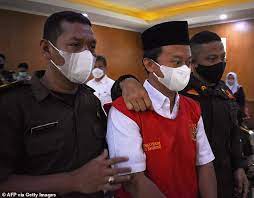 A teacher who raped 13 girls at an Islamic boarding school in Indonesia now faces the death penalty, a court said today, after initially being sentenced to life in prison.

Herry Wirawan, who judges say s*xually harassed 13 girls between the ages of 12 and 16 and impregnated at least nine of his victims, was sentenced to life in prison in February, but prosecutors seeking the death penalty filed an appeal.

The shocking case has highlighted the need to protect children from s*xual violence in religious boarding schools in Indonesia.

“(We) punish the accused with the death penalty,” the judge said in a statement posted Monday on the Bandung High Court website.

Ira Mambo, Herry’s attorney, declined to comment on whether there would be an appeal, citing the need to see the full court ruling.

A spokesman for the local prosecutor’s office also said he would wait for the final ruling before commenting.

Indonesia, the world’s largest Muslim-majority country, has tens of thousands of Islamic boarding schools and other religious schools that are often the only way for children from the poorest families to get an education.

Wirawan had arrived at court in handcuffs and kept his head down as the judge sentenced him. The court said restitution for the victims will be paid by the government.

While the chairman of the Indonesian Child Protection Commission said the initial verdict meant that “justice has been done for the victims”, a relative of one of the victims told the AFP news agency that he was “very disappointed” that Wirawan not receive a harsher sentence and warned that clemency would embolden other abusers.

‘This wound will never heal as long as we live, perhaps until we die. The pain we are feeling is indescribable. We don’t feel heard,” said Hidmat Dijaya, uncle of one of the 13 victims.

“If the sentence is as lenient as this, there will be more Islamic teachers who abuse children,” he added.

‘We will let God as supreme judge punish him. We can only pray that those judges did not represent our hurt and pain.’

Indonesia, the world’s largest Muslim-majority country, has tens of thousands of Islamic boarding schools and other religious schools that are often the only way for children from the poorest families to get an education.

More than 25,000 Islamic boarding schools, known as ‘pesantren’, are spread across the country, with nearly five million students living and studying in the dormitories.

The Bandung rape case shed light on the problem of s*xual abuse in some of the schools, with 14 of the 18 cases reported to the Child Protection Commission last year occurring in pesantren.

Last year, two teachers at a boarding school in South Sumatra were arrested for s*xually abusing 26 male students over the course of a year.

And in 2020, a boarding school teacher in East Java was sentenced to 15 years in prison for s*xually assaulting 15 female students.