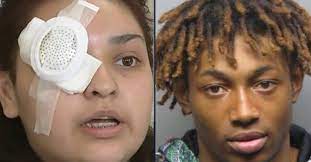 A 20-year-old man allegedly punched a California burger worker so hard she lost an eye while trying to stop him from harassing a special needs child.

Police received calls about an assault at The Habit Burger in the San Francisco Bay Area around 5:30 p.m. 12th of November.

Bianca Palomera, 19, was working when she noticed four men harassing a special needs boy, the brother of one of her co-workers, who she waited until she finished her shift.

She told KNTV that one of the men, later identified as White-Carter, was hurling insults and threatening to hit the boy because he was looking in his direction.

Bianca Palomera, a 19-year-old fast food worker, lost an eye after being attacked for protecting a child with special needs.

Shocking surveillance video captured the moment the woman was beaten during an ensuing fight.

“She hit me once, and my headphones and glasses flew out of my face,” Palomera told KNTV.

The fierce attack caused him serious injuries that caused him to lose his right eye.

“This is the last thing I would have expected from anything,” Palomera said last month. “I do not fully regret having helped, intervened. It could have been worse for my coworker’s brother.”

Antioch police said they were assisted by the US Marshals Service in tracking down the suspect, who was arrested in Hayward and turned over to the local department.