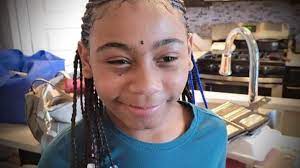 Who was Isabella Izzy Tichenor ?

A school failed to protect a 10-year-old black girl from bullies that ultimately drove her to suicide, newly published research has found.

The Davis School District in Farmington, Utah, failed to adequately address complaints filed by Isabella ‘Izzy’ Tichenor’s mother, Brittany Tichenor-Cox, in the months leading up to her death in November 2021, the commissioned independent investigation found. by the superintendent.

He discovered that the distraught girl, who was awaiting a possible autism diagnosis, had sprayed Febreze on her clothes after other students and even a teacher told her she smelled bad.

The special education teacher in question said that she had asked if Izzy had showered as she commented on how she smelled.

The report also revealed that staff at Foxboro Elementary School, which Izzy attended, were not even aware of the district’s formal definition of bullying.

He added that Foxboro fostered an atmosphere “in which bullying … might not be reported, investigated or addressed,” according to CNN.

However, the investigation concluded that the school did not do enough to protect the girl and address the allegations of bullying made by her mother in a timely manner.

The DOJ report, released in October 2020, found that black students were disciplined more harshly than white students and were ‘routinely’ called the n-word. White students also called Asian students “yellow” and “cross-eyed” and told them to “go back to China,” the report states.

The Davis School District was hit by a Justice Department investigation just weeks before Izzy’s death, which found that officials had spent years ignoring allegations of racist harassment made by black and Asian students, as well as their families. .

The subsequent investigation into Izzy’s death could not determine whether the harassment he had suffered was racist, although it did not rule it out.

He explained: ‘Issues related to race, disability and poverty sometimes intersect and when they do they can further complicate already difficult situations.

“It can be very difficult to separate one from the other.”

Izzy’s older sister had complained of racist bullying at the hands of students before her brother’s death, including an incident in which she was called the n-word.

The agency’s discovery came in a report and settlement agreement released in October, a month before Izzy killed herself. The investigation into the school district began in July 2019.

DailyMail.com has contacted Tyler Ayres, the attorney for the Tichenor family, and the Davis School District for comment.

Ayres previously said that Izzy’s family had reported the bullying to teachers and school officials, but felt ignored.

In response, the Davis School District said in a statement that it would review the report’s findings and offered a formal apology to Izzy’s family.

We are taking it seriously. We are committed to continuing our extensive and ongoing efforts to foster a welcoming environment for all students in the Davis School District,” the statement said.

Brittany Tichenor-Cox has consistently said in the past that Izzy has expressed reservations about her time at Foxboro Elementary School in North Salt Lake since the beginning of the school year.

She told her mom that she didn’t think her teacher would like her.

‘She doesn’t say “hi” to me. She says ‘hello’ to all the other kids,” Tichenor-Cox recalled Izzy saying.

Tichenor-Cox added that the teacher told Izzy she smelled bad, a comment she thinks other children also made in the schoolyard because of her daughter’s skin color.

Izzy was so affected by her comments that she started bringing a bottle of air freshener to school to use as perfume, causing Tichenor-Cox to cry.

The mother recalled that she eventually contacted her daughter’s teacher at one point, who says she refused to take action.

Tichenor-Cox said the teacher told her

“I’m not going to figure it out for them,” Tichenor-Cox said the teacher told her. She let them figure it out.

The teacher also allegedly told Izzy to sit down when she asked for her help and that he didn’t want to deal with her.

Tichenor-Cox also says that students made fun of Izzy for her looks and her autism, so she was awaiting a formal diagnosis at the time of her death.

The school’s principal and assistant principal told her they would take care of her, but Tichenor-Cox said she didn’t think anything had been done.

“Even though my baby is gone, I’ll make sure to represent Izzy,” Tichenor-Cox said through tears at a news conference in November.

‘I’ll never see her again…I never will…she was 10 years old. She was only 10 years old,” she added before burying her face in a table.

Less than two months before Izzy’s death, the Justice Department released a report after reviewing more than 200 complaints of racial harassment and other discrimination and conducting five visits to the district, during which they spoke with staff and students.

The report stated, “Black students reported strikingly similar experiences across the district: White students and other non-Black students routinely called Black students the n-word and other racial epithets, called them monkeys or apes, and said their fur was dirty or looked like feces.

Classmates mocked black students by making monkey noises, touching and pulling their hair without permission, repeatedly making references to slavery and lynching, and telling black students to “go pick cotton” and “you are my slave.” .

“Slavery-related bullying increased when schools taught the subject, which some black students felt was not taught in a respectful or considerate manner.

Darlene McDonald, a local activist whose two black sons attended school in the district, said her oldest son “was dealing with being the butt of black jokes,” according to the Salt Lake Tribune.

Tomoya Averett, 22, said she was the victim of ‘relentless’ harassment.

She says white students called her the n-word and told her ‘God hates black people; that’s why her skin is dark ‘when she was 16 years old.