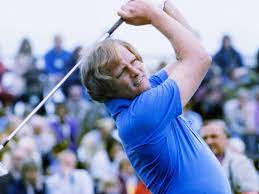 Who was Jack Newton ?

Australian golf champion Jack Newton has died of health complications at the age of 72.

The former Australian Open champion, who came close to winning the British Open and the US Masters, survived a horrific accident in 1983 when he lost an arm and an eye after crashing into a plane propeller in Sydney airport.

His family confirmed the news in a statement on Good Friday morning, stating that Newton’s passion for sport and community will live on.

His son Clint, a former NRL player and chief executive of the Rugby League Players’ Association, issued a statement that was read on the Today Show recently.

“On behalf of our family, it is with great sadness that I announce that our brave and loving husband, father, brother, grandfather and partner, Jack Newton OAM, passed away overnight due to health complications,” the statement read.

“Dad was a fearless competitor and iconic Australian, who blazed a formidable trail during his professional golf career between 1971 and 1983 before his career tragically ended following an accident involving an aircraft propeller at the age of 33. “.

Newton was still a top professional golfer when he collided with the spinning propeller of a Cessna aircraft at Sydney Airport on his way home to Newcastle after attending a Sydney Swans game in Sydney.

He was given only a 50:50 chance of survival after the crash, which abruptly ended his career, and he spent several days in a coma and two months in intensive care.

One of Australia’s most successful golfers in the 1970s and early 1980s, he turned professional in 1971 and won his first professional tournament, the Dutch Open, in 1972.

Newton was the 1979 Australian Open champion and is famous for nearly beating international champion Seve Ballesteros in the 1980 Masters Tournament, finishing tied for second place.

Newton’s charity work in support of youth golf and diabetes awareness raised hundreds of thousands of dollars through his annual Celebrity Classic and corporate competition.

Even playing one-handed golf, swinging the club with his left hand, he still scored in the mid-’80s.