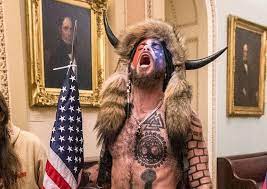 Who is Jacob Chansley ?

Jacob Chansley, the so-called “QAnon Shaman”, was sentenced to 41 months in prison for his role in the United States Capitol riots.

The Justice Department had called for Chansley to receive a harsh sentence as a way to set an example among the January 6 rioters, and prosecutors have positioned Chansley as emblematic of a barbaric crowd.

Since then, Chansley has gained fame as the “QAnon Shaman,” a figure known in the fringe movement online and for widely shared photos that captured him in face paint and a headdress inside the Senate chamber.

The day after the riot, on January 7, Chansley voluntarily called the FBI and admitted his role in the attack, surrendering two days later. He was originally charged in a six-count indictment that included civil disorder, trespassing and disorderly conduct before agreeing to plead guilty to the single count of obstruction in September. Chansley has been incarcerated in Washington, DC and Virginia since his arrest.

Since then, his attorney says the self-described Shaman has rejected QAnon’s conspiracy theory and tried to distance himself from former President Donald Trump, after unsuccessfully asking for a presidential pardon. Watkins described Chansley in court Wednesday as “a new man.”

Judge Royce Lamberth has kept Chansley in jail since his arrest, despite his multiple attempts to win his sympathy and release him.

Other justices are likely to see Lamberth’s sentence as a possible benchmark, as Chansley is one of the first felony defendants among more than 660 cases of Capitol riot to receive punishment.

Images of Chansley at the Capitol went viral due to an odd appearance as he led others through the Capitol, yelling into a megaphone. As one of the first 30 rioters inside the building, he made his way to the Senate bench that then-Vice President Mike Pence had hastily vacated and left a note, according to his plea papers.

Chansley also carried an American flag on a spear pole, which prosecutors have characterized as a weapon.

Lamberth asked just a few questions: about Chansley leaving a note for Pence and whether he knew of other threats to Pence’s life from the crowd, and about his decisions that day.
“You made yourself the image of the riots, didn’t you?” Lamberth told Chansley’s defense attorney. “For better or for worse, he became the very image of this entire event.”
Prosecutor Kimberly Paschall used multiple videos to show Chansley’s entrance to the Capitol building and the Senate chamber, screaming along with the crowd. “That is not peaceful.” Paschall called his role in the mob “chaos” and “terrifying.”
For more than 30 minutes, Chansley spoke with Lamberth about the impact jail has had on him and the guilt he feels for breaking the law.

He said that he was wrong to enter the Capitol on January 6 and that he is not an insurgent or an insider terrorist.
His lengthy speech caught the attention of the judge, as Chansley quoted Supreme Court Justice Clarence Thomas and “The Shawshank Redemption,” and described the desire to live his life as Jesus Christ and Gandhi.

“The hardest part of this is knowing that I am to blame. Having to look in the mirror and know, you really screwed up. Really,” Chansley said.
“I was in solitary confinement because of me. Because of my decision. I broke the law … I should do what Gandhi would do and take responsibility,” he says. “There are no buts or buts, that’s what men of honor do.” He promised never to have to be incarcerated again.
“I think his comments are the most remarkable I’ve heard in 34 years,” Lamberth told Chansley, calling his speech “similar to the kind of thing Martin Luther King would have said.”
But, Lamberth added, “what he did here was as horrible as he now admits,” and he couldn’t justify a shorter sentence.

After the riots and his arrest, Chansley apologized to then-President Donald Trump. He also went on a hunger strike in an attempt to get organic food while in detention and spoke to “60 Minutes” from jail without permission. In September, Chansley pleaded guilty to a felony of obstructing Congressional certification of the 2020 vote.

Photographs and videos taken during the riots show Chansley wielding a spear on Capitol Hill. Prosecutors also say he led other protesters in prayer on the stand, an elevated platform, and left a note threatening former Vice President Mike Pence.

“It’s only a matter of time,” the note said. “Justice is coming!”

Prosecutors had recommended a 51-month prison sentence, arguing that the government “cannot overstate the seriousness” of Chansley’s conduct.

“His rhetoric of him consisting of him before and after the event, and his apparent ability to carry out his intentions to violently remove the ‘traitors’ in our government, is clear from the evidence in this case,” the officials said. prosecutors.

Chansley now claims to have overruled Trump and QAnon.