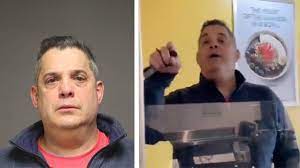 Who is James Iannazzo ?

Man charged over racist video, James Iannazzo is rumored to be a former student of Bunnell High School Connecticut.

James Iannazzo is a man from Fairfield who recently went viral due to his racist comments. He went to a Robeks on Black Rock Turnpike to get a milkshake. What followed was an ugly war of words with the employees.

The video is going viral on Twitter and Reddit and netizens want to know the background of the incident. Here’s an update from Curiosity.

Is this James Iannazzo from Bunnell High School Connecticut?

James Iannazzo is rumored to be from Bunnell High School. The internet talks about whether the man is a former student or an active employee there.

As the video circulates on social networks, people try very hard to find the identity of him. However, nothing can be confirmed as there are only discussions about it and nothing authentic of any kind to confirm it.

Similarly, it is not known on what basis the rumor started. The Internet is unaware of his connection to the school or his name.

Therefore, we can say that James’s profession and place of work are not known and it is not clear if he is in any way related to Bunnell High School in Connecticut.

James Iannazoo went to Robeks around 1 p.m. m. to have a milkshake. It was a normal purchase and he went home from there, but after a few minutes, 911 got a call from him.

Iannazzo wanted an emergency service for minors who were suffering. He too was sent to his area, but again headed for the Robeks. Now, the middle-aged man started abusing the employee for putting peanuts in his milkshake.

The abuse went even further when he began using slurs for the immigration status of workers. The incident was recorded and he left before the arrival of the police.

According to James’ statement, he was very upset because his son was allergic to peanuts and had asked them to give him a milkshake without them. This led him to lose control and return to the store to abuse them.

James Iannazzo was arrested after the police were informed about the case. His charges include intimidation based on bigotry or bias, breaking and entering and breach of the peace.

His court hearing is set in Bridgeport Superior Court for February 7.