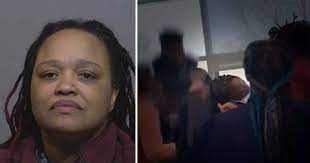 A veteran teacher at a magnet school in Connecticut has been arrested after video captured the educator pulling the student’s hair at the end of the school day.

Jennifer Wells-Jackson, 49, faces one count of felony risk of injury to a child and one count of second-degree misdemeanor disorderly conduct in the incident at King/Robinson Interdistrict Magnet School in New Haven. around 3:45 p.m. on february 1.

Destinique James, 12, told police that Wells-Jackson had pulled her hair when the final bell rang and she was leaving her class, police said.

A recording of the incident, which took place in a classroom, shows the teacher holding James’ braided hair behind her as another student pulls a classmate away from the pre-teen. Police did not say if the teacher was trying to break up a fight.

Wells-Jackson finally let go of James’ hair after she was heard yelling at several other students.

James did not sustain any injuries and refused medical attention, police said.

The student’s mother, Destine James, said she was “disgusted” by the teacher’s actions. Her daughter had told her that the school intercom had just finished class when the teacher ‘dragged’ her back into the classroom.

Wells-Jackson, an instructional literary coach, was released on $20,000 bond and was expected to make her first court appearance on Monday.

She was described as a well-respected teacher and community activist, who is also a long-time member of the New Haven Federation of Teachers.

It was the fourth arrest of a teacher employed by the same district since last November.

The school district said it is fully cooperating with investigators and takes the safety of its students very seriously.