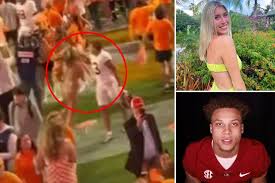 Lost Alabama wide receiver Jermaine Burton has been accused of punching at least two opposing Tennessee fans, including a woman, as they stormed the field en masse this weekend.

At least two TikTok videos appear to show him lashing out as he headed to the locker room after his team’s 52-49 loss on Saturday.

In one, a woman appears to jump to her left to avoid the rapidly advancing Crimson Tide player, only for him to attack with her left hand.

The woman stops in her tracks and puts her head in her hands as she turns around seemingly in shock as the player walks by.

The clip was shared by Tennessee fan Emily Isaacs along with the caption: “I was hit in the head by Jermaine Burton as I walked past him after his loss on Saturday.”

Isaacs confirmed to Fox affiliate sports site OutKick that she was the woman in the video, but she declined to comment.

Another fan from Tennessee shared another clip of him repeatedly yelling “Oh my gosh! Oh my god!” as the field turns into a sea of ​​orange shirts, with Burton once again seemingly attacking with a right hand.

“Jermaine Burton was so mad he had to punch me after the loss,” the fan wrote, using JoJo’s name.

“I was told that he also hit a girl in the head,” she said.

Tennessee fan site The Volunteer complained that the player made “intentional head contact with a female Tennessee fan.”

“Completely unnecessary behavior on Burton’s part,” she tweeted.The SEC (Southeastern Conference) announced Monday that the University of Tennessee will be fined $100,000 for allowing fans into the competition area.

OutKick said neither the SEC nor the University of Alabama immediately responded to requests for comment on the allegations about Burton, who also does not appear to have addressed them.