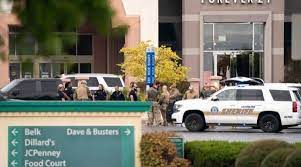 Who is Jewayne M Price ?

A suspect has been arrested in connection with the shooting at a shopping center in South Carolina on Saturday that left 14 people injured.

The shooting took place Saturday afternoon at the Columbiana Center in Columbia, South Carolina. Of the 14 injured, nine were shot while five were injured in the panic and chaos as shoppers tried to flee the scene.

Columbia Police Chief William Holbrook said authorities believe the shooting was “not a random act of violence” but was caused by “some kind of conflict” between a group of armed people who knew each other.

Police said the suspect, identified as 22-year-old Jewayne M Price, will be held at the Lexington County Detention Center.

Meanwhile, the Columbiana Center also released a statement saying “today’s isolated and senseless act of violence is extremely disturbing and our thoughts are with all those affected. We are grateful for the quick response and continued support from our security team and our partners in law enforcement.”

Local media reported that a heavy police and emergency personnel presence remained at the mall as of Saturday night. The mall is located about 10 miles north of downtown Columbia.

Police had previously said they had arrested three people in connection with the shooting. Holbrook later said that one of the three people initially detained by police remained a person of interest and would remain in police custody. He is expected to be charged with unlawful possession of a pistol.

The shooting victims were between the ages of 73 and 15, police said, but there were no fatalities. The 73-year-old victim is the only person who continues to receive medical treatment, according to police. All other victims have been treated and released or will be released shortly, according to a news release.

Police said investigators seized “a firearm related to the incident” and that “preliminary examination of ballistic evidence collected at the scene indicates that two suspects used at least two different firearms.”