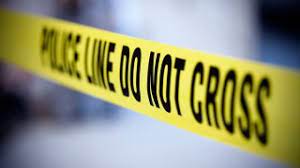 A South Florida woman is facing a murder charge after police say she stabbed her husband more than 140 times and beat him with a butcher knife.

Burke is accused of killing her husband, Melvin Weller, 62, at her Palm Springs home on Feb. 11.

Weller’s stepson called 911 after he came home from work to find Weller lying on the ground in a pool of blood, according to a Palm Springs police report obtained by WPTV.

When officers arrived, they found Weller’s body on the floor surrounded by a pool of blood that covered more than half the kitchen, according to the report.

There was blood spattered and smeared on the walls, and a pair of knives and a butcher knife were in the kitchen sink, according to the report.

Burke was found lying on a bed and remained mute, and was taken to a local hospital for evaluation, according to the report.

An autopsy revealed that Weller suffered more than 140 stab wounds and a skull fracture caused by a blow from a butcher knife.

Arriving at the gruesome scene of the murder, police found Weller’s body in the kitchen, with blood stains on the room’s walls, ceiling and cabinets.

Knives and a butcher knife were found in the sink and tools and cleaning supplies were found next to Weller’s body, local news station WPTV reported.

An autopsy later revealed that he had been stabbed 140 times throughout his body and had a skull fracture.

Burke, who was conscious in the master bedroom but not speaking, was taken to JFK Hospital for evaluation.

Police said they found lacerations on his hands.

A woman who appeared to be Weller’s cousin posted a tribute on Facebook.