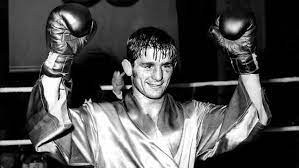 MELBOURNE, Australia — Former world boxing champion Johnny Famechon has died in Melbourne after a long illness. He was 77 years old.

The Sport Australia Hall of Fame announced Famechon’s death in a statement on Thursday. Famechon was hit by a car while jogging in 1991 in Sydney, causing him to have a stroke and resulting in acquired brain injury.

The Australian boxer’s most memorable world title win was his WBC points decision win against Cuban Jose Legra at London’s Albert Hall in 1969. Famechon boxed professionally for over 20 years and had a record 56 wins, 20 by knockout, six draws and five losses.

Johnny Famechon (left) defeated José Legra for the WBC featherweight title in 1969.
access point
Famechon defended his world featherweight title against Japan’s Masahiko Harada, better known as Fighting Harada, six months after beating Legra and won in a controversial points decision. In their world title rematch, Famechon knocked out Harada in the 14th round in Tokyo. Famechon attempted to defend his WBC title in May 1970 in Rome against Mexican Vicente Saldívar, but lost the fight. He retired from boxing soon after at the age of 24.

Born Jean-Pierre Famechon in 1945, he moved to Australia from France with his family at the age of five.“Johnny Famechon was one of the most popular Australian boxers of all time,” said Sport Australia Hall of Fame President John Bertrand. “Johnny was our humble and skilled world champion, showing the essence of how we see our heroes. He was described as poetry in motion, a master craftsman”.