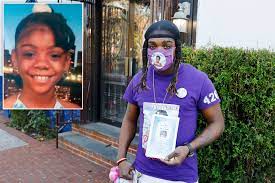 The mother and teenage brother of 7-year-old Julissia Batties were arrested Wednesday for brutally beating her to death at their Bronx home last summer.

Navasia Jones, 35, and Paul Fine, Jr., 18, were arrested Wednesday morning and charged with murder and manslaughter for killing Julissia, who was returned to her mother despite pleas from the helpless girl

Fine was also charged with s*xual abuse for allegedly assaulting his little sister.

The arrest was a welcome relief for the girl’s grandmother and former caregiver, who waited almost a year after the tragic death for the mother to be held accountable.

“Oh my God, I’ve never been happier,” the slain girl’s grandmother, Yolanda Davis, told The Post. “Oh my gosh, thank you so much. My God, I really thank you.”

“I am so happy that justice is being served for my granddaughter,” she said. “Oh my gosh, I’ve never felt so good.”

“I’m going to court, I have to see this. This, I definitely have to see.”

Navasia Jones told police her young daughter fell and hit her head on a desk.
Her son, Julissia’s father, Julius Batties, told The Post it was a “great day.”

“I am extremely happy about this arrest. I can finally start the healing process,” she said. “It took almost a whole year, but it is here and I am ready for this process to continue.”

She added: “I want to thank the detective and district attorney for their hard work.”

The tragic girl’s lifeless body, with evidence of trauma all over it, was found the morning of Aug. 10, 2021, inside an apartment at Mitchel Houses on Alexander Avenue, police said.

“Mum and brother are both guilty,” said a senior police source. “Both had a role in this, but it’s unclear who struck the fatal blow.”

After the girl was found dead, the girl’s mother told police that she fell and hit her head on a desk.Julissia Batties was taken to Lincoln Hospital on August 10, 2021, after police officers responding to a 911 call at her Alexander Avenue apartment found her unresponsive. She was pronounced dead within an hour. At the time, doctors told police that Ella Batties had dilated pupils and apparent trauma to her face and right side of her body. Her internal temperature was 96.6 degrees and she was cool to the touch, the doctor reported.

But the teenage brother later admitted that he assaulted her sister before she was found dead in her apartment, police sources told The Post a day after the murder.

Fine Jr. allegedly admitted during questioning that he punched his sister eight times in the face when her mother went to the store around 5 a.m., the sources said.

Hours later, the girl began vomiting and passed out, prompting the 35-year-old mother to call 911.

Batties was rushed to Lincoln Hospital, but he could not be saved.

The case was ruled a homicide, police said. He died of “abdominal blunt force trauma,” according to the city medical examiner’s office.

Police have been called to the apartment at NYCHA’s Mitchel Houses on Alexander Avenue six times in the last three years, according to the sources, who said that on at least one of those occasions, the mother covered for the teen.

The last call came in March 2020, the sources said.

In a harrowing audio recording obtained by The Post, young Julissia wept hysterically and begged her grandmother not to send her on a court-ordered weekend visit with her mother.

Despite her pleas, she Julissia was sent to visit her mother, who lost custody of the girl at birth, along with four children, due to alleged neglect and physical abuse.

Julissia’s brother admitted that he assaulted her sister before she was found dead
Against the objections of her grandmother and court-appointed attorney, on June 21, the city’s Administration for Children’s Services finally returned Julissia to live with her mother, unsupervised, for the first time.

She was murdered less than two months later.