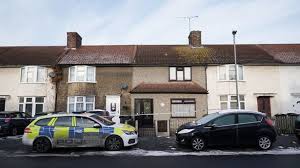 A 44-year-old woman has been charged with the murder of two young children who were found dead at an east London property last Friday.

Emergency services were called to an address in Cornwallis Road, Dagenham at 2 p.m. m. Friday, where the bodies of the children were discovered.

Police at the scene in Cornwallis Road on Friday where the bodies of two children, aged two and five, were found.

A coroner’s officer handles a bag of evidence as he investigates the deaths of two young children in Dagenham on Friday.

Both officers and the London Ambulance Service attended, but the children were pronounced dead at the scene.

His family has been informed and continues to be supported by specialist officers.

Post-mortem examinations and formal identifications will be arranged in due course.

Alexander was arrested Friday in connection with the incident and was charged Monday with two counts of murder.

A man previously arrested in connection with the tragedy was released without further action over the weekend.

“This is clearly an extremely distressing incident with many unanswered questions, however, at this very early stage, no one else is wanted in connection with the deaths.”

“I want to thank the local people for the assistance they have given officers as they begin to work together with partner agencies to establish the full circumstances of these two tragic deaths.

You will see additional officers in the area, and anyone with information or concerns should speak to those officers.’