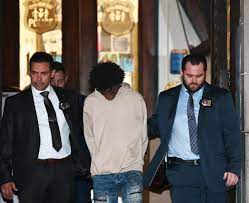 Keyondre Russell, 18, of Queens, was arrested on charges of murder and criminal possession of a weapon. On Saturday morning, police.

A 15-year-old boy has died after being shot in the chest on a moving subway train Friday afternoon in Far Rockaway, Queens.

Investigators said an argument between groups of teenagers on the southbound A train escalated as the train approached the Far Rockaway-Mott Avenue station just before 4 p.m.

Police identified the teen as Jayjon Burnett. The Good Samaritans reportedly carried him onto the platform, where first responders performed CPR.

Burnett was rushed to Cohen Children’s Hospital but did not survive.

New York police have made an arrest in the shooting of a 15-year-old boy on a subway train in Queens on Friday afternoon.

Keyondre Russell, 18, of Queens, was charged Saturday with murder and criminal possession of a weapon in the slaying of Jayjon Burnett, CBS2’s Alecia Reid reported.

Police took the suspect out of the 101st Precinct around 6 p.m.

The Far Rockaway-Mott Avenue station was closed for more than seven hours Friday night as police sifted through evidence. They say an argument between two groups began on the street several stops away and then escalated while they were on the train. Before the southbound A train arrived at the terminal, police say the suspect pulled the trigger.

Burnett was hit in the chest and died at a nearby hospital.

Police say that once the train doors were opened, everyone spilled out onto the streets. NYPD detectives reviewed all possible surveillance video, including additional footage from the neighborhood.

It was the eighth homicide that occurred on public transport this year. Arrests were made in all other incidents.

“Any time an act of violence occurs in the subway system, it is taken very seriously. The response from the NYPD is intense. Our detectives’ investigation is robust and very thorough,” said NYPD Traffic Chief Jason Wilcox.

There was a growing memorial inside Burnett’s apartment building as neighbors mourned the teen. Tenants who saw the boy grow up said they are still coming to terms with the senseless shooting.

“It shouldn’t have happened. That wasn’t because of that young man. It wasn’t his time. They just took that young man’s life. It’s sad. It’s sad that we have to go through this every day, having these young men.” boys killed for no reason,” said Bridget Ford.

A GoFundMe page organized by the victim’s family says he was killed a week before his 16th birthday. In the 11th grade at the time of his death, his goal was to attend college in Florida.

“His mother, Christine, and his father, J, always raised him in a good way. He went to school, everything. He didn’t bother anyone. This wasn’t necessary,” Ford said.

The shooting marked an especially dangerous month for MTA passengers. There have been four traffic deaths in the past two weeks, from stabbings to shootings, CBS2’s Alecia Reid reported.

During rush hour Friday, a heated argument on the southbound train turned deadly.

Police say someone pulled out a gun and shot the teen once in the chest. It is not clear if the two groups knew each other.

“If this had any nexus to gangs or crew members, that’s one avenue that will be explored,” said NYPD Traffic Chief Jason Wilcox.

“We are downloading a video now to try to find out who this perpetrator was,” said Richard Davey, president of NYC Transit.

It was the eighth homicide to occur in the MTA system this year. All suspects in the previous seven murders have been arrested.

Straphangers are on the limit.

“It’s too much,” Far Rockaway resident Ricardo Rankisson said of the gun violence plaguing the city.

Police say the 15-year-old boy was killed after two groups began fighting on an A train.

Investigators believe the attack was not random and are still searching for the shooter. As CBS2’s Alecia Reid reported, the violence is part of a disturbing trend in the transit system.

Police say this is the eighth MTA homicide to occur this year and the fourth in the last two weeks.

Detectives are downloading video to try to determine who pulled the trigger.

“What’s the motivation? That’s being investigated, if he had a nexus with a gang or a group. That will be explored, but it’s still to be determined,” said NYPD Traffic Chief Jason Wilcox.

During a news conference Friday night, police said two groups of teenagers began arguing on the southbound A train. The altercation escalated and someone pulled out a gun and shot the 15-year-old boy once in the chest.

The Good Samaritans took him off the train when it arrived at the Far Rockaway-Mott Avenue station. Two patrol officers immediately administered first aid, police said.

The victim was rushed to Jamaica Hospital. He was pronounced dead about an hour later.