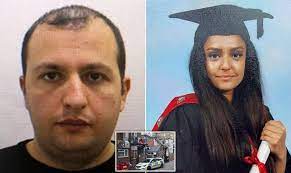 A 36-year-old man was charged with the murder of teacher Sabina Nessa.

Former delivery driver Domino Koci Selamaj, of Eastbourne, East Sussex, was arrested in the seaside town early Sunday morning and a shiny Nissan Micra was seized on a residential street about 800 meters away.

He will appear in Willesden District Court on Tuesday.

Ms Nessa was killed while walking through Cator Park in Kidbrooke, southeast London, on her way to a friend’s house on September 17.

Her body was found covered in leaves near a community center in the park almost 24 hours later.

An employee of a newsstand near the apartment where Selamaj lived said that he would go to the store to recharge the phone or the ignition key, but that he would not have a conversation.

“He was so calm, he didn’t say anything, he just came to refuel and left,” said the saleswoman.

Hundreds of people, including her sister, gathered Friday for a torchlight procession in memory of her at Pegler Square in Kidbrooke.

Ms. Nessa’s sister, Jebina Yasmin Islam, collapsed as she spoke in front of the crowd.

She said: “Words cannot describe how we feel, we feel trapped in a bad dream and we cannot get out of it; our world is destroyed, we just run out of words.

“No family should go through what we are going through.”

“The charges relate to the murder of 28-year-old primary school teacher Sabina Nessa in Kidbrooke, southeast London, on Friday 17 September 2021.

“The London CPS Homicide Squad approved the charges after examining a package of evidence received from the Metropolitan Police Service.

“The first appearance of the accused will take place on September 28, 2021.

“The prosecution reminds everyone involved that the accused is the subject of a criminal investigation and has the right to a fair trial.

“It is extremely important that there are no reports, comments, or information sharing online that could interfere in any way with this process.”