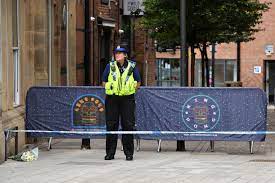 A 21-year-old man has been charged with the murder of Tyson Fury’s cousin, Rico Burton, 31, who was stabbed to death in Manchester over the weekend.

Liam O’Prey, of no fixed address, has been taken into custody and is due to appear at Manchester and Salford Magistrates Court on Wednesday.

He was arrested following the death of Rico, an up-and-coming boxer, outside a bar in the Goose Green area of ​​Altrincham early Sunday morning.

Greater Manchester Police said O’Prey will also be charged with the assault on a 17-year-old boy who was seriously injured and received life-saving treatment from members of the public at the scene following the alleged incident.

The force said Rico’s family continues to be supported by specialist officers and has been “updated with progress made” by detectives from our Major Incident Team.

It added in a statement: “The teen victim’s family thanked everyone who helped provide first aid that night, including first responders, to allow her to continue her recovery at the hospital, where she remains stable with some significant life changes. “. injuries

“A 20-year-old man who was also arrested on suspicion of murder has been released on bail pending our ongoing investigations.”

Rico is believed to have been enjoying a night out with friends when he was allegedly stabbed in a ‘spontaneous’ and ‘unplanned’ attack outside the venue, Greater Manchester Police said this week.

Mr Burton had been watching the heavyweight fight in a pub before heading to another in Altrincham, where violence suddenly broke out, after the junior boxer allegedly went out for a “smoothing”.

In the wake of the alleged attack, Fury made an emotional plea for harsher sentences for knife crime, calling on the government to deal with the ‘pandemic’, while also paying tribute to his cousin.

Fury wrote on Instagram: ‘This has to stop. As soon as possible the UK government must pass higher sentences for knife crime, it’s a pandemic and you don’t know how serious it is until it’s one of your own!

‘Life is very valuable and can be taken away very quickly, enjoy every moment. RIP RICO BURTON. May the lord god grant you a good place in heaven. See you soon.’

At a police news conference on Sunday, Superintendent Ben Ewart said the attack “made no sense”, adding that the stabbing occurred “spontaneously” and was “not planned”.

But there was “more to be done” to “spare families the misery that (knife crime) causes.”

A No 10 spokeswoman said: “Under this government, those caught with a knife are more likely to be sent to jail, and for longer, than they were a decade ago.”

At a news conference at the scene on Sunday, Superintendent Ewen praised the people who had provided first aid at the scene and confirmed that a 17-year-old boy remained in a “serious but not life-threatening condition”.

He continued: ‘Both victims should have returned home this morning after enjoying a night out with friends.

Both men were taken to Manchester Royal Infirmary where the 31-year-old man sadly succumbed to his injuries and died. I can confirm the man is Rico Burton. The 17-year-old remains in hospital with serious injuries.

“I can take this opportunity first to convey my deepest condolences to Rico’s family and friends, and also praise those members of the public who stepped in and provided first aid.”

Superintendent Ewart added: “Goose Green is a popular nightspot and would have been busy at the time and I am calling on anyone who was there during the night of Saturday 20th August or anyone with information about this incident including footage of telephone photographs or video to come forward, in particular, any friends of any of the victims or suspects who were with them that night and have not yet come forward.

“We have increased policing in the area and knife crime remains a priority for Greater Manchester Police, the devastating effects of which have been demonstrated this morning.”