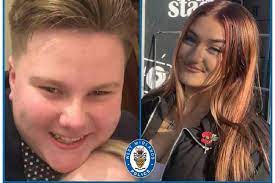 The two teenagers killed when a Nissan crashed into a crowd at a car rally late on Sunday night have been named, as their bereaved families pay tribute.

Liberty Charris, 16, and Ben Corfield, 19, were described by their families as “hearts of gold” after their sudden deaths this weekend.

The teenagers were attending a meeting on the A457 Oldbury Road in Oldbury, near Birmingham, at around 11:30 p.m. m. when a car crashed into the crowd they were in.

They were pronounced dead at the scene by emergency services.

A witness who had been a spectator at the car meeting claims that it had been organized through Snapchat and that it had drawn a crowd of 200 people.

A man and a woman, in their 20s, were taken to hospital in life-threatening condition.

They remain there and are now stable, West Midland Police said today.

Police said the car was a blue Nissan Skyline that hit multiple pedestrians, with footage from the scene showing a brick wall being destroyed.

A 54-year-old man arrested on suspicion of causing death by dangerous driving has been questioned by investigators.

He has since been released on police bail and is assisting police with their ongoing investigations.

“We were standing on a corner and there was a bush and we couldn’t see much. The driver had gone down the road and lost control and crashed into a bunch of people. It was horrible,” a witness told BirminghamLive.

Liberty’s family today paid tribute to her by saying: ‘Liberty, our beautiful girl and sister.

‘So loved by her family and friends, they were all so proud of the beautiful young lady you were becoming.

‘With your heart of gold, sparkling blue eyes and beaming smile, your goal in life was to make everyone happy, with your funny accent and loud laugh.

‘From the moment you were born, we were all so in love with you, you loved life and you had an amazing future ahead of you.

‘Our hearts are shattered to pieces. Shine up there, our beautiful girl.

Ben’s family said: ‘What can we say other than Ben was the light of our lives?

“He was a larger than life character with a huge heart that was made of gold.

‘Nothing will heal the gaping hole in our lives: our hearts are forever broken.

Detective Sergeant Paul Hughes, from our Serious Collision Investigation Unit, said: “While our hearts and thoughts go out to the families of these young men, our focus remains on establishing the full circumstances of the incident.”

“Our investigations will be extensive and thorough and we would like to thank everyone who has already spoken with us and passed on information.

“But we know there were a lot of people gathered in the area at the time and we would ask anyone else with dashcam footage or any other witnesses to contact us.”

‘The first and second were a man and a teenage girl, who were pedestrians, in critical condition.