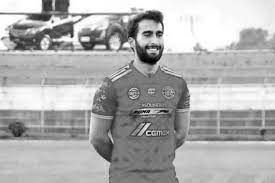 Who was Marcos Menaldo ?

Marcos Menaldo of the Guatemalan Deportivo Marquense died tragically after suffering a heart attack during a training session on Monday.

The 25-year-old defender had complained of difficulty breathing during a preseason session as he prepared for the new season with his teammates.

The tragedy occurred at the Marquesa de la Ensenada Stadium where Menaldo received emergency CPR treatment on the San Marcos court before being transferred to the Specialty Hospital where he died.

Hernán Maldonado, president of the Deportivo club, has already referred to the heartbreaking death of his player when he told ESPN digital: “He is astonished.

“To a young, dynamic and jovial person, this happens. It’s quite strong and shocking because you don’t just lose a player, you lose a friend.

“God has his plans and his purposes, but unfortunately we have death. It was around 11:00 a.m. that they called me to inform me that Marcos had passed out in training.

“They transferred him to the health center where they did everything possible. But unfortunately, death was confirmed.”

His death is not the first to shock football in recent weeks, nor is it the first cardiac arrest.

Croatian footballer Marin Cacic died under similar circumstances before Christmas after a sudden collapse in training.

The 23-year-old was diagnosed with heart failure shortly after being rushed to a nearby hospital.

Like Menaldo, the doctors fought tirelessly to save Cacic’s life, although his efforts unfortunately failed and the Croatian was pronounced dead on December 23.

European football has seen several notable players collapse during games over the past 12 months, including the cardiac arrest of Christian Eriksen during Denmark’s opening game of Euro 2020.

The former TottenhamHotspur midfielder collapsed during the latter stages of the first half of Denmark’s game with Finland.

Sheffield United midfielder John Fleck also fell to the grass unopposed during a recent championship matchup, though he has since returned to action for the Blades.

Manchester United central defender Victor Lindelof had to be replaced last month due to complaints of chest pains during the 1-0 win over Norwich, but the Swede has also appeared from the scare.

Earlier this season, a Champions League clash between Sheriff Tiraspol and Real Madrid saw winger Adama Traore fall to the grass clutching his chest, before field medics instantly rushed to tend to the Mali international.