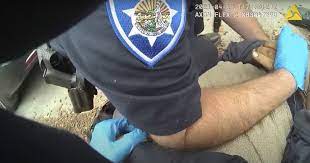 Who was Mario Gonzalez?

Mario Gonzalez was a man who was pinned to the ground for five minutes by an officer in California before he became unresponsive and later died, police body-camera footage released Tuesday. The April 19 footage shows officers confronting Gonzalez in the Bay Area city of Alameda.

How old was Mario Gonzalez?

Mario Gonzalez was 26 years old at the time of death.

In an initial report on Gonzalez’s death, the police said the officers were responding to reports of a man who “appeared to be under the influence and a suspect in a possible theft.” The hour-long footage shows officers initially talking to Gonzalez and instructing him to put his hands behind his back.

Gonzalez is heard talking incoherently and does not comply with the order.

A scuffle ensues, and the footage shows officers pinning Gonzalez to the ground while applying pressure to his back. One officer can be seen placing his knee on Gonzalez’s back for four minutes, and Gonzalez is seen protesting and struggling and appears increasingly to be in distress.

“Think we can roll him on his side?” one officer is heard asking.

The officer who is restraining him is heard saying in response: “I don’t want to lose what I got, man.”

At this point, Gonzalez goes silent, apparently unconscious. The footage shows officers then attempting to resuscitate Gonzalez before emergency workers arrive. In total, Gonzalez was restrained face down for about five minutes.

Mario Gonzalez Cause of Death

Authorities said Gonzalez later died at a hospital. The police have said the cause of death is still unknown pending an autopsy, NBC Bay Area reported.

Gonzalez’s brother, Gerardo Gonzalez, has accused the police of killing him.

“The police killed my brother, in the same manner, they killed George Floyd,” Gerardo Gonzalez told a Tuesday press conference.

Gonzalez’s family said he had a 4-year-old son and was also the main carer for his 22-year-old brother, who has autism. Authorities in Alameda said that an investigation into Gonzalez’s death had been launched and that the officers involved in the incident were put on paid leave while it is being conducted.

According to the Associated Press, the city said that it was “committed to full transparency and accountability in the aftermath of Mr. Gonzalez’s death.”

In the body camera footage, the first officer at the scene asks on his radio whether a nearby store has reported any recent thefts, describing Mr. Gonzalez, who has two Walgreens shopping baskets. The officer, who identifies himself as Officer McKinley, then continues to speak with Mr. Gonzalez, asking whether he knows Alameda and whether he is thinking of hurting himself or others. Mr. Gonzalez struggles to maintain the conversation or provide his name.

Another officer arrives about seven minutes after the first officer.

“Here’s the plan,” the first officer says. “I’ve got to identify you, so I know who I’m talking to — make sure you don’t have any warrants or anything like that. You come up with a plan, let me know you’re not going to be drinking in our parks over here. And then we can be on our merry way.”

Three police officers have been placed on administrative leave, and the Alameda County Sheriff’s Office and the Alameda County District Attorney’s Office are both conducting independent investigations. The city of Alameda has also hired Louise Renne, the former city attorney for San Francisco and a former president of the San Francisco Police Commission, to conduct its own investigation.