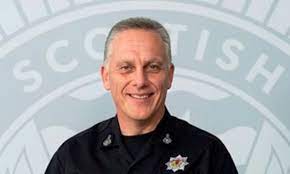 Who is Martin Blunden ?

Scotland’s top firefighter has been suspended amid allegations of a harassment investigation.

Managing Director Martin Blunden, who earns around £200,000 a year for his position with the Scottish Fire and Rescue Service, has been in the role since early 2019.

Blunden’s social media accounts have been deactivated, although they were recently used on March 20.

The suspension is understood to relate to allegations of bullying, The Scotsman reported.

Board chair Dr Kirsty Darwent said: ‘We take any allegations against staff members very seriously and have robust procedures in place to ensure complaints are thoroughly investigated.

‘Any complaint will be considered confidential pending progress.’

Mr. Blunden was tweeting from the @FireScot-Chief account on March 20, but the account now indicates that the profile does not exist.

The CEO role is the highest level professional role in the SFRS and is intended to “provide strategic leadership direction” to the service.

Mr. Blunden joined SFRS after a period working in South Yorkshire, where he was Deputy Director.

He has also worked with the Buckinghamshire and Hertfordshire Fire and Rescue Service.

A Scottish Government spokesman said: ‘SFRS takes any allegations against members of staff very seriously and such matters are the sole business of the SFRS Board.