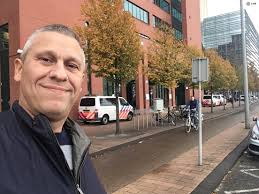 Who is Martin Kok ?

A Scottish gangster faces life in prison after being found guilty of murdering a Dutch blogger who was shot eight times outside a s*x club.

He was lured to his death by Christopher Hughes, a member of a criminal clan with connections all over the world, including the Colombian drug cartels and the Italian mafia.

The 33-year-old was instructed to meet Kok at an Amsterdam hotel before going to a s*x club and alerting others to his location.

As the pair later left, and Hughes petted a cat outside, double-murderer Kok was shot as a “favor” for Morocco-based gangsters.

Hughes now faces life in prison after being convicted at Glasgow High Court of murder and involvement in serious organized crime between July 2013 and January 2020.

Hughes was questioned by Dutch police the day after the shooting before being allowed out.

He remained at large in Europe while the international investigation into the brothel shooting continued.

It was his apparent confession to a fellow gang member turned informant that led to his downfall.

Hughes was captured at a hotel in Turin in Italy in January 2020 and brought back to Scotland on a European arrest warrant.

The murder, although it occurred abroad, was investigated as part of Police Scotland’s massive Escalade operation, which has already seen a string of gang members jailed for a total of more than 100 years.

The mafia has been described as the ‘most sophisticated’ encountered by the authorities.

They are said to be at the ‘top of the chain’ of the UK drug trade and at the same time have an ‘unprecedented’ arsenal of firearms at their disposal.

The clan’s reach was such that it forged links with international mobsters.

They also mingled at showbiz parties around the world with famous names, including rappers 50 Cent and Nicki Minaj, on a luxury yacht heading to the Abu Dhabi Grand Prix.

Hughes was a trusted member of the mob and the jury was shown a photo of him smiling with the two crime lords leading the crew.

They cannot be identified for legal reasons.

He was listed by HMRC as apparently ‘unemployed’, but ‘wages’ of £40,000 a week earned him a luxurious lifestyle in the Algarve.

The informant explained to jurors that he was told to arrange a meeting at an Amsterdam hotel between Hughes and Kok.

Kok, a convicted murderer, was ultimately a crime writer who had created a website that exposed criminals in his homeland.

The informant told jurors he believed the meeting was to discuss advertising for the company’s encrypted phone company MPC, financed with £1m of dirty money, on Kok’s new crime TV show .

Originally, the murder was to take place outside the Citizen M hotel in Amsterdam.

But Hughes, originally from Glasgow, later told the informant that the gun had “jammed” during a “step-by-step” of events at his Antwerp apartment 11 months later.

The murder occurred later that night when Hughes paid for Kok’s night out at the s*x club and supplied him with cocaine.

The supergrass stated that he was talking to his crime boss the night of the incident.

The insider said: ‘He [The Boss] had been talking about someone waiting for Martin Kok and Christopher Hughes was going to hold back.

“Martin left just before Chris and made a comment about a cat showing up at the club and stepping back to pet him.”

Prosecutor Liam Ewing QC asked what was the meaning of petting the cat.

The witness replied: ‘Martin was going to his car first, so there was no mistake someone was caught in the crossfire.’

Jurors watched security cameras moments after the shooting of Hughes walking away from the scene and texting on a cell phone.

Mr. Ewing also asked the informant if Hughes knew something was going to happen to Kok that night.

The witness stated that he had a meeting with his boss a month after the murder.

He said: “I was told it was an arrangement because the boy had access to Martin with a group called the Roccies, a Moroccan criminal group, which is everywhere but most prominent in Amsterdam.”

Hughes’s boss then arranged for him to be picked up while he hid in the bushes while mercy crews arrived on the scene.

Hughes told police the next day that he was involved in “tech support” with the phone company, which he was funded with £1m in dirty money, but would not name who was involved.

He further said that he threw away his encrypted phone because it had broken and got rid of his clothes.

Mr Ewing told the jury in his closing remarks: “Recovered from a machine inside one of the locked garages was £700,000.”

“There was £40,000 worth of anti-surveillance equipment that can only be found in the hands of government organisations, but this group has it in a holding cell in Chapelhall.”

Hughes shook his head after being sentenced and was heard to say ‘fuck you’ when Mr Ewing applied for a felony prevention order.