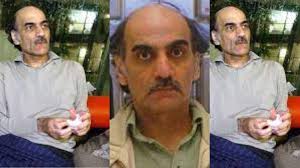 Emergency services were called to help Mr. Karimi Nasseri, but they were unable to save him.

Nasseri lived in Terminal 1 at Paris Charles de Gaulle Airport from 1988 to 2006, and the 2004 film starring Tom Hanks was loosely based on his story.

He was born in 1945 in Soleiman, a part of Iran formerly under British jurisdiction, to an Iranian father and a British mother.

He left Iran to study in England in 1974 but was jailed on his return for political activism before being expelled.

Mr Karimi Nasseri found himself stranded in international no man’s land without proper documentation after claiming he was mugged on his way to Charles de Gaulle airport in 1988.

He boarded a plane to London but was sent back to Paris, where he was arrested as he tried to leave the airport.

live at the airport

She lived in Terminal 1 at the airport from 1988 to 2006, initially in legal limbo for not having residency papers.

But then he stayed at the airport by choice, according to French media reports.

An official said he was living at the airport again in recent weeks.

His story inspired the 2004 film starring Tom Hanks, who plays Viktor Navorski, a man trapped in New York’s JFK airport after being denied entry to the US by a military coup.

Mr. Karimi Nasseri, also known as “Sir Alfred” of Charles de Gaulle Airport, revealed his experience in a book titled The Terminal Man, published the same year as the film.